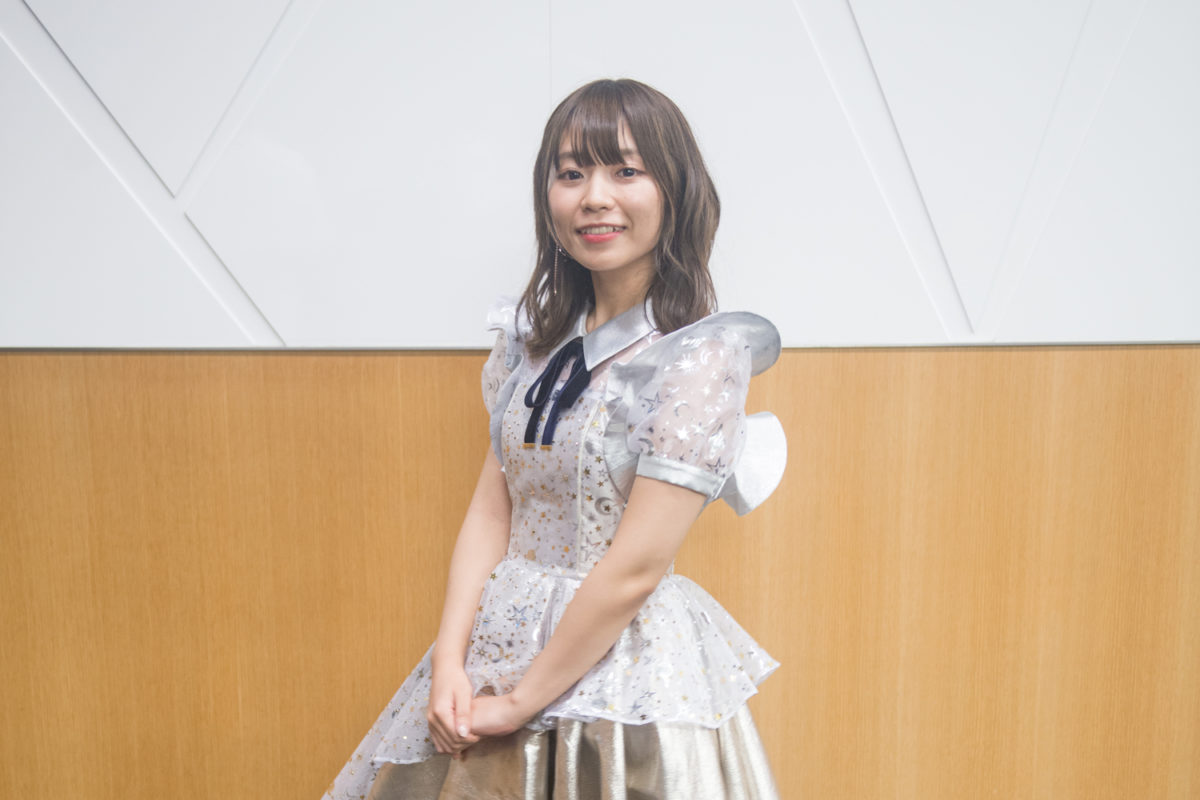 C3AFASG2018 was YURiKA’s first ever overseas performance and we were lucky enough to sit down with the up-and-coming, bubbly songstress to ask her a few questions. Enjoy!

As a die-hard fan of Key, and especially the Visual Novel (VN) series, Summer Pockets, what are your impressions of the series/game?

My first impression when I saw the game was that my dream came true, as I am a huge fan of the game label Key and have played all of their games so far. I was really delighted when Key actually contacted me to sing an insert – 夜奏花 (Yasuoka) – for Summer Pockets! Whenever I play the game I would hear my own song, which provides me with a sense of surrealism and accomplishment; like a dream that came true.

Note: In a previous interview, YURiKA actually shared that as she wanted to keep her perspective as a fan, she personally went down to buy a physical copy of the game prior to receiving her sample game. She has played it countless times and recently, she also went down to the collaboration cafe and received an Umi character can badge.

How did you develop your passion for the Anime, and more specifically, the Anisong industry?

When I was 12 years old, my first taste of the genre was Genesis of Aquarion (Sōsei no Akuarion). I remember being stunned when I first heard the theme song as it was so powerful. From then on, I realised that I actually wanted to do the same – to sing such a powerful and emotional song that everyone listening would be mesmerised and amazed by it.

Having performed two opening theme songs for TV Anime Series Little WItch Academia, how do you feel about the Anime itself?

The first opening song for Little Witch Academia (TV) – Shiny Ray – is actually my debut song and is special to me, so yes, I have watched the Anime! Being given this opportunity to be a part of this franchise is another dream come true. Also, for tonight’s performance, I will be wearing a costume that pays homage to ‘Akko’ (Kagari Atsuko; female protagonist), where the glass beads design is similar to her outfits in the Anime!

Among all your songs, which is your favourite?

*squeals in despair* It’s too hard for me to choose! I love all of them!

It’s quite difficult for me to give a fixed schedule because I do a wide variety of activities every day – live radio broadcasts, recording for new songs, meetings and even concert and choreography practices. However, one thing I would absolutely do daily is to try and wake up once at 7am (whether I go back to sleep or not is another matter *laughs*). I also make sure I have time for myself to rest everyday, and would usually play games to de-stress!

Yasuoka was used as the theme song for the reunion scene between Shiroha Naruse and Umi Katou (in Summer Pockets). How did you feel when you were delivering the song for this moment?

Prior to the recording of the song, I was actually shown the scenario that my insert would represent, so I knew where my song would come in during the game. As a result, I would cry every time I do the recording for Yasuoka, as the reunion is a very touching and poignant moment for me. I would actually have to prepare myself before hand by telling myself to not cry before each recording.

As a fan myself, I feel that Key’s strength of weaving songs into the story impactfully is a really attractive selling point. On the other hand, since I’m a part of their family now, I feel a need to protect this beautiful connection between Key’s visual novel titles and their accompanying songs.

Note: In a previous interview, YURiKA mentioned that she feels a strong need to protect Umi as she believes that Umi is the ‘real heroine’ of Summer Pockets. She also noted that Umi will always be a special child to her.

Who is your favourite Anisong artiste and who would you like to collaborate on a song with?

*responds almost immediately* Lia-san! I really like her and I would jump at the opportunity to collaborate with her.

Now that you have debuted, do you still play the piano, and is there any chance for you to do so during your live performances?

Actually, I have been learning the piano since I was 3 to 4 years old and I’m currently still playing it. However, I haven’t gotten the chance to perform it live but, I would definitely want to do it sometime in the future.

What do you like or enjoy the most as an Anisong artiste?

When I was rehearsing for tonight’s live, the staff were also practising their timings and played the Anime scenes behind me. I like the uniqueness of this experience; you can only experience it as an Anisong artiste and nobody else would share the same experience. Special moments like this makes me very happy and I cherish it deeply.

Despite Katou Umi being your favourite character in Summer Pockets, you would still choose Tsumugi Wenders out of the four main heroines. Can you tell us why?

Your latest single, Futari no Hane (ふたりの羽根), was released on August 15, 2018 and was also used as the opening theme for TV Anime Series, Hanebado!. Can you please tell us more about the song?

Hanebado! is a sports Anime featuring high school girls playing badminton. So when i sing the song, I actually want to project my voice and deliver my thoughts and feelings with an intensity similar to how a shuttlecock would be hit across the court.

For my live concerts in Japan, whenever I perform this song, I would actually serve a shuttlecock into the crowd. For today’s concert in Singapore as well, I have brought my racket from Japan and hope to do the same for my Singapore fans! *laughs*

If you could, which Anime series would you choose to live in?

*squeals in despair again* It’s a difficult question! But, I would actually like to become a student again, so I would actually choose to live in Little Witch Academia and enrol myself in the Luna Nova Magical Academy!

As the target audience for Little Witch Academia is 10-12 years old, how would you explain your job as an Anisong artiste to them?

I would explain it simply as an occupation that would get the chance to sing the main theme music for an Anime series. The singers would also put lots of love and understanding into their voice and performance when delivering the song.

What would be your toughest experience in your career as an Anisong artiste?

*after contemplating for awhile* Up till now, I feel that the Animelo Summer Live is definitely the toughest experience, as there is so many people watching the live, some even flying over just for this concert! It’s also the event which I put in the most thought and consideration into the performance, and was most troubled, to appeal myself to the audience. I wanted to perform in a way where everyone would enjoy watching my performance.

Note: YURiKA’s dream when she debuted was to perform at Anisama, and she was elated that the milestone was accomplished earlier this year. Initially, she felt uneasy and afraid as it was such a momentous task to achieve, but looking back now, she said was really fortunate to be provided with opportunity and will continue to work hard!

Having successfully completed her show at Anisama and now, her maiden performance overseas, we at J-Experience definitely expect big things from her in the future. Her down-to-earth attitude and energetic persona makes her really attractive to us and her fans. Coupled with her determination and vocal talents, we are certain that YURiKA will be someone to watch in the future!

Having been exposed to music early on in her life, YURiKA took great interest in how Anisong’s deep meanings, even for one phrase or word. Since then, she has continuously hone her vocal and music capabilities at her schools’ chorus club, even juggling performing lives and her studies. While performing well in her first few competitions, her main breakthrough came in 2016, when she won the NHK’s Nodo Jiman – an amateur singing competition.

She then debuted with music label Toho Entertainment in 2016, after passing the first TOHO animation RECORDS Next Generation Artiste Audition. Starting her career off with a bang, her first single, Shiny Ray, was used as the opening theme of TV Anime Series Little Witch Academia!