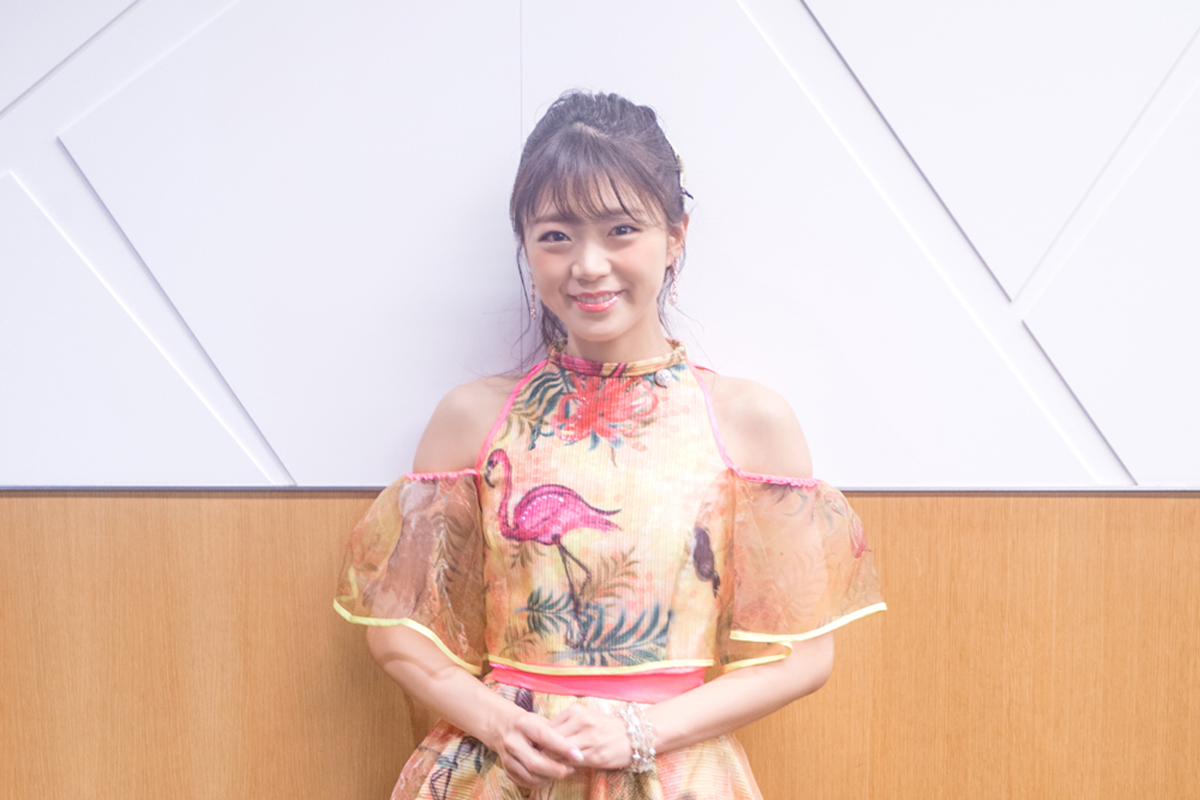 Returning once again to Singapore is the talented Suzuko Mimori, who was in town to both promote TV Anime Series Revue Starlight as well as perform in C3AFASG2018’s I Love Anisong Concert! Despite her busy schedule, we managed to catch the veteran voice-actress & singer for a few words. Enjoy!

Q: Shoujo☆Kageki Revue Starlight (少女☆歌劇 レヴュー・スタァライト) is a novel project where the artistes have to both perform in stage theatre and voice the characters in the TV Anime Series. What is your first impression when you were first introduced to this project?

I was actually a musical stage theatre actress many years ago (prior to her debut as a voice actress under Bushiroad), therefore, I feel that this project is right up my alley. It is also a platform for me to demonstrate how much I have grown. Personally, I felt that it was easier for me to transit back from voice acting to musical stage performance due to my previous experience.

My fellow theatre performers were also challenging voice acting for the first time, so I felt that I could give them tips and advice due to my experience (as a seiyū). It was also quite nostalgic as I felt that I was looking at myself 10 years ago.

Lastly, as a huge fan of this series myself, I particularly enjoyed seeing the fusion between both forms of art during this project!

Q: How do you feel about this opportunity to participate in Revue Starlight, given your previous experience in theatre?

Although I have prior experience in theatre, by the time I was offered the opportunity, it had been quite some time since my last musical performance. Initially, I felt a little afraid as it had been so long since I had done anything related to theatre. Furthermore, at the time of offer, I had already set my heart on pursuing a voice acting career, so I did feel some sense of apprehension in taking up the job.

However, I finally decided to take up the role as I felt that the project was somehow tailor-made to my strengths (of both theatre and VA), as if someone was guiding me to the role.

Q: In your opinion, what are the similarities and differences between you and your character – Hikari Kagura in Revue Starlight?

For similarities, I feel that we both have the passion for being on stage (i.e. performing arts) and that our lives are intertwined with music, where we both participated in dance and vocal lessons after school or work.

As for our differences, I feel that Hikari is a little more childlike, whereas I think that I am more calm and composed. *laughs*

Q: How do you prepare yourself when portraying a character of an opposite personality?

Q: The BD/DVD for your 5th Anniversary Live, five tones, was released recently. Was there anything interesting that occurred during the live?

For the 革命のマスカレード (Kakumei no Masquerade) song during the live, I had to don a huge, red dress as part of the theme of the song, and because the dress was so large, I needed the help of two staff ladies to hold up the skirt from within *laughs*.

They not only had to hold the dress up for the entire song, the staff also had to continuously shake the skirt from within to mimic the natural wavy movement of a skirt. *laughs*

Q: As your new mini album, holiday mode, will be released on February 20 next year, could you please tell us more about it regarding the concept and/or design?

I am actually still doing the recording for the album! As for the concept of the tracks is to portray the enjoyment one has during our rest days. Therefore, some of the tracks are quite relaxing while others are more uplifting and fun. However, as there are still more tracks to be recorded, I can’t really reveal anymore. Please look forward to it!

Q: You have been a part of Milky Holmes for the past 8 years, how would you define your journey as the group is approaching to an end?

It has been a long journey for the last 8 years with Milky Holmes, so I feel that there are too many memories that would be difficult to express with just simple words. There were definitely plenty of memorable and fun moments, but there were also times where I felt helpless at my inability to do more for Milky Holmes; to work harder.

However, looking back at the four of us, we were always together and hence, we became strong confidants, able to chat casually with one another.

In fact, the last time we came to Singapore, *after struggling to remember hokkien mee and feeling great relief at doing so* we would often search around and crave for hokkien mee to eat as Milky Holmes! So I guess I would keep such fond memories of Milky Holmes (after the group has ended).

Q: What was your most memorable working experience with μ’s (muse)?

*after thinking for a while* I guess my most memorable experience would be participating in 第66回NHK紅白歌合戦 (NHK Kōhaku Uta Gassen) as a part of μ’s. My grandmother managed to catch that exact Kohaku segment that I was participating in, which helped her to understand my work as it was very difficult for me to convey what exactly I do due to generational differences. I felt really happy as I managed to let her see what I normally do for work as well as performing live on TV. I was also really happy that she was so proud of me, as my grandmother told me “it feels so good to live long enough to see you make it in life”.

Q: Do you still keep in touch with the other μ’s (muse) members?

Yes, we do still contact each other from time to time. However, everyone is just so busy at the moment, hence, we don’t really have the time to meet and hang out with one another. But I did manage to catch Iida Riho’s musical stage performance (Le Cirque de Karakuri) recently. I hope we can all meet up soon!

Who is your favourite musical artiste, and is there anyone you would like to collaborate with?

My most favourite musical artiste is a theatre performer called Sasamoto Rena. I met her during my stage performance debut and even though she was only a year older than me, she was already considered a veteran in the scene as she started theatre at a very young age. While I felt very accomplished to have debuted at the renowned Imperial Theatre (Teikoku Gekijo), Sasamoto-san has already performed there multiple times. Even now, she is still an esteemed and prominent public figure in Japanese stage theatre and is still active in stage performances, therefore, I really respect and look up to her as a role model.

As for collaborations, I’m really interested in doing a duet like those in Frozen *laughs*. In fact, my mother used to be in the fan club of Inoue Yoshio for quite some time, so maybe I could do a duet with him. *laughs*

Despite racking up huge successes with both μ’sand Milky Holmes early in her career, Suzuko Mimori isn’t slowing down anytime soon! She continues to break boundaries by fronting novel projects while maintaining many of her voice-acting roles. Not only that, the talented songstress is also active in the music scene, with her latest release soon to be out in February next year! As an artiste of many talents, we expect much more to come from the down-to-earth superstar!

Prior to her debut in the Anime industry, Suzuko Mimori, affectionately called by fans as Mimorin, actually started out as a stage performer in theatre, before being spotted by Bushiroad in 2008. She then debuted as a voice-actress, securing many roles due to her hardworking personality and pleasant voice, most notably Tantei Opera Milky Holmes, Love Live! and more recently, Revue Starlight.
Not stopping at just voice-acting, Mimorin also debuted as a singer in April 2013 and has continued to achieve multiple Top 10 Oricon charts with her 8 singles and 4 albums. Her 2018 has been a very successful one, with the release of her 4th album – tone. –  in July 2018, followed immediately by her 5th Anniversary Live in August. Her first mini-album, holiday mode, will be released on February 20, 2019!
Website: http://mimorin.com/
Twitter: @mimori_suzuko