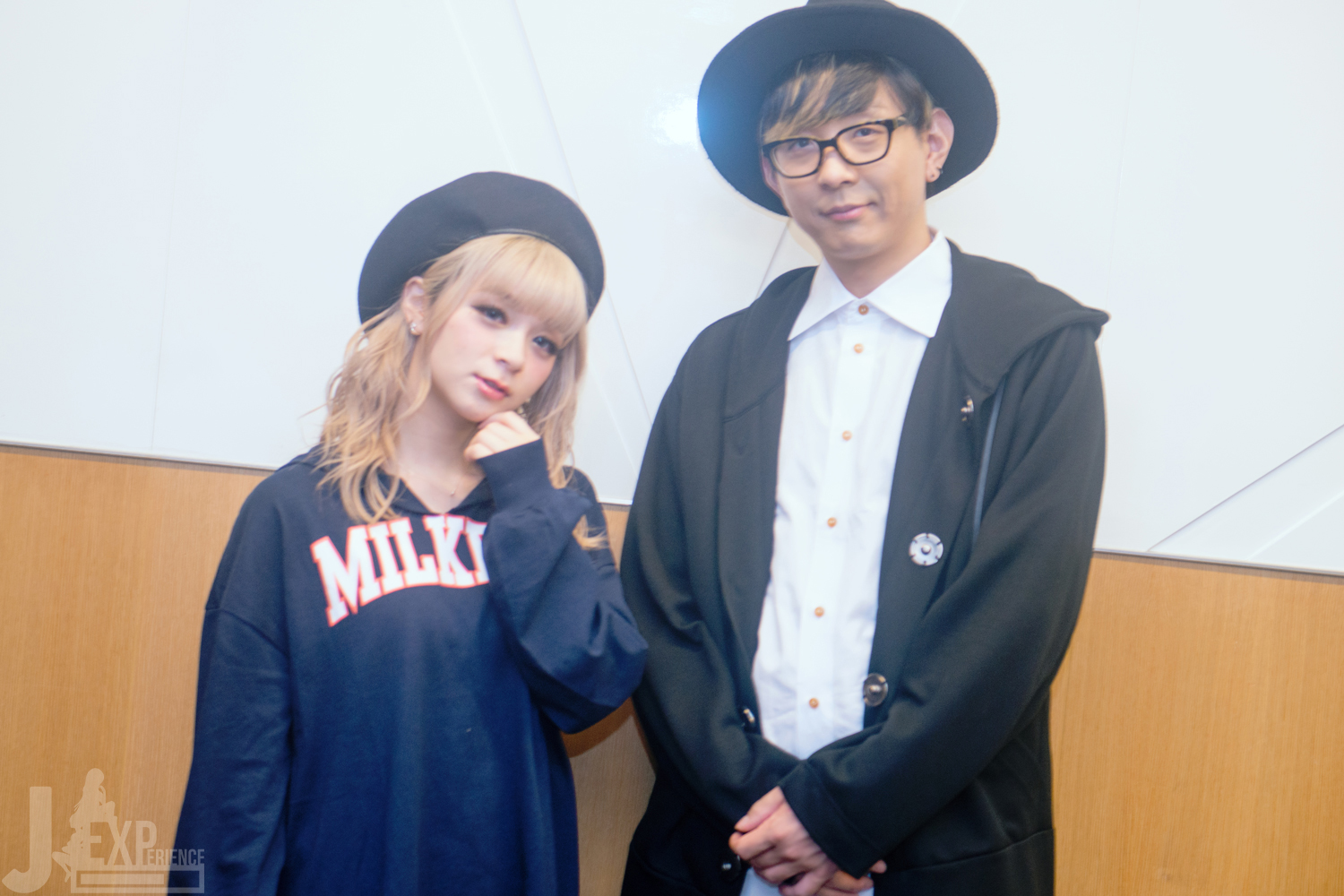 GARNiDELiA made a quick stopover in Singapore this AFA to perform in the ILA Concert, and to announce their upcoming one-man live in Singapore on April 13, 2019! We managed to catch up with the unique duo to ask them about their 2018, and their plans for next year!

極楽浄土 (Gokuraku Jodo) has almost reached 40 million views on Youtube (as of this writing, it has reached more than 41 million views) and many people are doing dance covers of the song globally. What are your impression and feelings of such a feat?

We are very happy and excited as this shows that our fans are liking and enjoying our music, right when we are beginning to tour overseas. The concept of Gokuraku Jodo is actually pretty Japanese – shown by the lyrics and music, choreography and especially, the costumes. Therefore, we hope that even as we continue to incorporate more Japanese themes into our music, ours fans globally would continue to love it as well. We are also very happy that the fans are very receptive of Gokuraku Jodo and love it so much to the point where they would even do dance covers of it!

What was the concept behind GARNiDELiA’s second compilation album, Kyouki Ranbu, and its accompanying outfit designs?

The concept of the album is actually due to our Odochatte-mita (踊っちゃってみた) dance series. We felt that since we already have 10 songs related to the series, it was a good time to create a best album.

As for the outfit concepts, since the release of Gokuraku Jodo, everyone is already familiar with our style of Japanese music and costumes. Thus, we wanted to use our music and videos to let everyone know Japan’s amazing traits and beauty, which we try very hard to include in our pieces.

As for the colour theme of the album, GARNiDELiA’s colour has always been blue, so this was really important for us to incorporate into the album design.

Mimue and 217, both are odorite (dancers), has collaborated with GARNiDELiA in a couple of dance videos and even onstage in some of your live performances in Japan! How did such a collaboration happen?

This collaboration started way back when the Odochatte-mita (踊っちゃってみた) series started. Six years ago, when I was still pursuing a solo career, I was known as an utaite (cover singer). So, I thought that if I also danced in my covers, it would be quite interesting, plus I am also very passionate about dancing. While I was thinking of who to dance with, I met Mimue-san at an event. But then, I wanted to have three members instead, since it was better formation-wise. So from there, Mimue-san actually introduced 217-san and we did 極楽浄土 (Gokuraku Jodo). After releasing the video, we were really amazed by how well-received and well-liked it was, so we thought to just continue the project. And now, it has culminated into quite a series!

G.R.N.D was released in March this year, consisting of many different music styles and genres. Could you please share with us some insight on the concept behind such a unique album?

Maria: When we were thinking of the album concept, we thought about the roots of GARNiDELiA, and even our respective origins prior to forming this unit. I was a jazz singer before GARNiDELiA, hence, my love for jazz music and me wanting more of our fans to fall in love with what I was doing before. Besides jazz, we also really like R&B (Rhythm and Blues) music and want to incorporate it into the album as well.

Toku: As for me, my roots prior to GARNiDELiA was in rock and J-pop.

Maria: Therefore, through this album, we want everyone to discover who we were before, our roots and origins, and fall in love with us all over again, in a completely unique and different way.

Recently, GARNiDELiA collaborated with TrySail for TV Anime Series Beatless’ 2nd opening theme – Truth. Could you please tell us more about this collaboration and do you have any specific artiste/DJ in mind that you want to do a collaboration with?

Maria: Definitely angela! *laughs* We are both a pair of one male and one female so it would definitely make it quite interesting, plus they are our seniors, so it would be great to collaborate with them!

Maria: Usually, I would only write the lyrics for the songs that I would sing. However, this is the first time that I was writing for someone else to sing. When i was writing the lyrics, I had to consider external factors such as the Anime characters and the personality of each Trysail member. I thought that this was a really interesting experience and different from the usual experience of writing my own songs.

Toku: We were actually requested to create a song with more of a dance tune, which isn’t something you would associate with TrySail and their style. Their performance last night and the song’s music video actually shows a different side to TrySail, where they danced a lot. Therefore, we are really happy to have a hand in creating this song for them, in showing a unique side of TrySail to their fans.

Note: The reason that GARNiDELiA is laughing when replying with the group angela is because there is now an ongoing trend of duos mimicking one another’s introduction when they perform (e.g. angela, fripSide, GARNiDELiA, etc.).

How did Maria debut as a model for galaxxxy (clothing brand in Tokyo)?

I believe I have quite the fashion sense, and I love fashion, shopping and clothes *laughs*. Through my shopping trips, I slowly became friends with the staff at the galaxxxy store. One day, out of the blue, I was invited by galaxxxy to attend their anniversary party, and from there, someone approached me to be their model, and the rest is history.

GARNiDELiA has a unique sense of style, especially when it comes to their fashion and outfit choices. Does GARNiDELiA personally design the outfits, and if so, where do your inspirations come from?

Maria: Yes, for GARNiDELiA’s lives, concerts, CDs, photoshoots, I am actually in charge of all of it and will think of the entire concept. Firstly, toku will create the music, then based on his music, I would create a colour scheme and the outfits. Sometimes, when I cannot find the outfits quickly, I would mix and match different sets to get the design and colour scheme that I want. Then, I would work with the stylist right down to the smallest detail, even choosing the type of fabric used for the outfits. As you can see, I am really hands-on in creating the outfits for our group.

Maria: So in summary, in terms of our group dynamics, Maria is in charge of everything related to fashion and aesthetics of GARNiDELiA, whereas toku is the music producer, making us a unique group in the scene!

Last but not least, for the Singapore stop during your Asia Tour next year, are there any surprises that we can look forward to?

*both laughs* Well, a surprise is a surprise so if we tell you now, it wouldn’t be a surprise anymore! Even though we can’t say much, this will be the first time that we are performing a one-man live in Singapore. Usually, we would only perform in events (like AFA), hence, we would definitely have more time to spend with everyone. Currently, we are still in the the midst of planning and thinking of surprises for everyone, so please, do look forward to the concert next year!

(note: all questions were answered by Maria unless otherwise stated)

Capping off an incredibly successful year with the stellacage Asia Tour 2019 that was filled with 2 albums and several milestones, GARNiDELiA doesn’t seem to be stopping anytime soon! Their Asia Tour will bring them right here to Singapore, their first one-man live ever in the small city-state! (GA tickets still available at https://www.apactix.com/events/detail/garnidelia19). With strong vocals, great style and lyrics provided by Maria and a talented producer in toku, we can expect greater things from them in 2019!

GARNiDELiA, the music duo comprising of vocalist, Maria and composer, toku, was formed in 2010 and debuted in 2014 with the first single, Ambiguous, which was also used as Kill la Kill’s 2nd opening theme. Since then, they have been a significant force in the Anisong industry, producing their 3rd studio album, G.R.N.D (released March 2018), and singing for many Anime series, notably Fate/Apocrypha and Beatless.

Having just concluded their stellacage Tour 2018 in Japan, they are going to be embarking on an Asia Tour in 2019, bringing the talented duo to countries like Hong Kong, Taiwan and Singapore! Other than their musical achievements, Maria is also an extremely accomplished dancer, having fronted their Odochatte-mita (踊っちゃってみた) series, even releasing the Kyouki Ranbu compilation album this year. Their unique but strong compatibility, combined with their genre and musical diversity has definitely brought them straight to the top.

toku had a humble start, writing songs for Vocaloid, with SPiCa being his most famous masterpiece. With a background of Italian classical music and the ability to piece together numerous instruments in his songs, he has worked with and arranged numerous songs, such as oath sign with LiSA. Now, he brings his talent through GARNiDELiA.

The other half, Maria, is also incredibly talented, cheerful and energetic. She started singing and dancing at 13 years old. Before GARNiDELiA, she collaborated with Vocaloid composer Jin and was part of a vocal and dance group before it disbanded. Now, she uses her powerful and deep vocals, and her overwhelming stage presence and talent to bring GARNiDELiA to life.