[AFASG’15][INTERVIEW] GARNIDELIA: “FOREVER ON ALERT TO GET INSPIRATION!”

[AFASG’15][INTERVIEW] GARNIDELIA: “FOREVER ON ALERT TO GET INSPIRATION!” 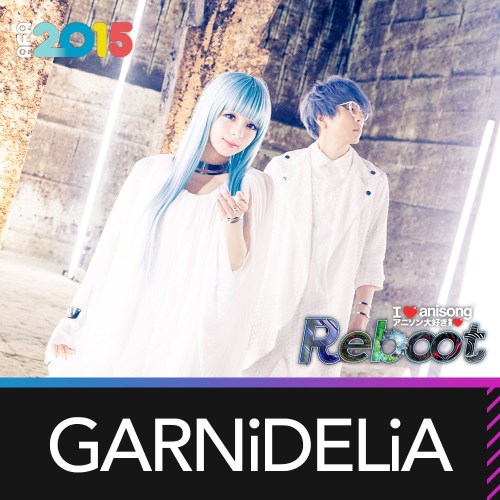 To countdown till the next AFA, we will be releasing an article each month from the past AFA! To kick everything off, let’s begin with the up and coming GARNiDELiA!

GARNiDELiA – a music unit comprising of vocalist, MARiA and composer, toku – was formed in 2010 and debuted in 2014 with Kill la Kill’s 2nd opening, Ambiguous.

They have since written songs for popular anime such as Mahouka Koukou no Rettousei and Gundam Reconqusta in G, and released 2 studio albums – Linkage Ring and BiRTHiA.

toku had a humble start, writing songs for Vocaloid, with SPiCa being his most famous masterpiece. With a background of Italian classical music and the ability to piece together numerous instruments in his songs, he has worked with and arranged numerous songs, such as oath sign with LiSA. Now, he brings his talent through GARNiDELiA.

The other half, MARiA, is also incredibly talented, cheerful and energetic. She started singing and dancing at 13 years old. Before GARNiDELiA, she collaborated with Vocaloid composer Jin and was part of a vocal and dance group before it disbanded. Now, she uses her powerful and deep vocals to bring GARNiDELiA to life.

We sat down with the dynamic duo for a quick interview!

Q: How has the current GARNiDELiA changed as compared to the one from the indie days?

Toku: For the BiRTHiA album, MARiA-san actually re-sings all the songs.

MARiA: At that time, I was only 18 years old when I sang the song “ARIA”. Now that I’m 23 years old, I feel that my voice would have changed to become more mature. Since our debut, we also have met many more new fans and became more popular, which eventually lead to us gaining confidence. I would definitely say that we would have already grown up to become a newer GARNiDELiA.

Q: How does GARNiDELiA feel about appearing on the cover art as opposed to, having a character/mascot on it instead during your indie days?

Toku: During our indie days, we were under the doujinshi category and went to sell our CDs at Comiket and M3 (Music and Mixed Media). We realised that before our major debut, it is more popular for the artistes to use mascots instead to have higher sales. We decided that is how we want our style to be.

MARiA: However, when we had our major debut, we decided to change our approach as it would be easier for us to gain popularity and let our fans know more about us by showing our real faces. Therefore, we revealed who we actually are.

Q: How much input do both members have over the GARNiDELiA’s cover art designs and costumes?

MARiA: When we decide on how the designs and the cover art should be like, I am actually the one to produce the whole thing. I would discuss it with the whole crew – the producers and the stylists. For example, we would discuss what it expresses, what colours should be used and how should the song be delivered to our fans. Afterwards, we would also decide on what clothes we would don during the performance.

MARiA: Upon finalizing with the crew members, I would then do up a small proposal and hand it in to the management. Our management will go through it, re-discuss the points, and we will come to a consensus on how the final product will be like.

Q: MARiA-san’s fashion style always looks so cute and beautiful. Where do you get your inspiration?

MARiA: Thank you very much! (laughs)

MARiA: When I actually come to a final decision, how I want the style to be, I would then discuss with my stylists to make my ideas into real design jackets and costumes.

GARNiDELiA giving out their autographed poster to a fan. (Source)

Q: When GARNiDELiA were setting out in the early stages, what are some of the main challenges you guys faced? Were there any other challenges after debuting?

MARiA: During our indie period, we were mainly focused on increasing the views of our videos on NicoNicoDouga (NND) and YouTube (YT). With those videos easily available online, there will definitely be all sorts of comments that come with it, both good and bad ones. We would read through the comments and try not to get too hurt by the unpleasant ones. We would also try to improve ourselves from reading the feedback.

MARiA: We were mainly more active on the internet so when we did live performances back then, we didn’t really have as much audience as compared to now. Once, for one of our live performances, we only had 10 attendees.

MARiA: That’s why we are really thankful for the recent one-man live, as we had 1,300 people were watching us. We are really happy that more people have learnt about us and are also really thankful for having more chances to perform overseas. On the other hand, as we are more popular now, we have to be stricter with ourselves. We cannot fall sick easily, and have to take good care of ourselves. We also have to put up good performances and not fail so as to not let our fans down.

Q: What would you describe as your happiest moment as a performing group?

MARiA: (laughs) My most enjoyable time would be when we’re doing our one man lives. As a result, we got the chance to meet so many new fans! For us though, the day when we found out that we were going to have our major debut will always be a very special and memorable day.

GARNiDELiA performing at ‘I Love Anisong:REBOOT’ in Singapore! (Source)

Q: What relaxing activities do GARNiDELiA do in your free time?

MARiA & toku: We really, really love music, so being able to do something that we love for our career is something really fulfilling. We actually don’t really have much time to rest. When we have the chance to rest, we usually spend it on sleeping. (laughs)

MARiA & toku: When we’re awake, we usually spend every single moment linked up with our music. For every sound that we hear, we would ponder over whether we could use it for our next song. We would pick up the little hints around us, so it’s actually quite difficult to tell when we’re actually resting. We’re forever on alert to get inspiration for our music. That’s why we usually only get to rest when we are sleeping.

Q: What kind of advice do you have for aspiring independent artistes on Nico Nico Douga or Youtube?

MARiA & toku: Now, there is an increasing pool of aspiring artistes out there. As compared to our earlier days, it’s easier to be in this field right now. We don’t really get very bad comments like what we gotten back then; people are more polite now.

MARiA & toku: On the other hand, the industry is more competitive with more people aspiring to become a musician. We feel that the most important part is for the person to find their own style and strengths and further research on how they’re able to further improve their strengths , to make it into something that is irreplaceable which represents them, making them unique . The person should also have firm beliefs and not be easily swayed by others.

MARiA & toku: We, too, will continue to work hard as well! Thank you for your support!

Thanks for the interview, GARNiDELiA!

That’s the end of the interview! But that’s not all! GARNiDELiA will be releasing their 5th single – Yakusoku –Promise Code-, the ending theme for Qualidea Code – on the 17th of August, so please do continue to support them! Thank you very much!