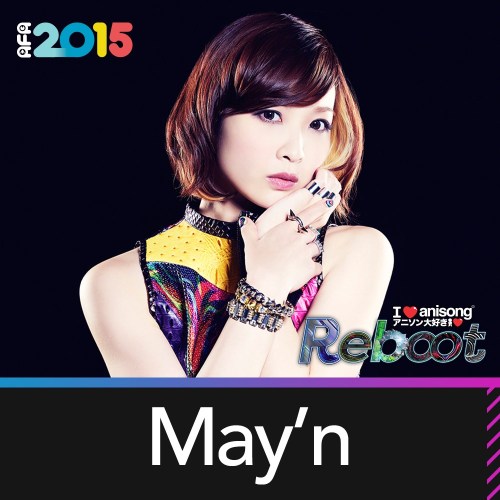 Now, this is one artiste that needs no introduction! Anisong star May’n is definitely having a stellar year, having celebrated her 10th anniversary in 2015! Still, on her celebratory decade, she has released 2 singles for the anime series, Aquarion Logos, as well as her compilation album – POWERS OF VOICE.

Her unique sound and amazing showmanship has allowed her to stay at the top of the game, despite having already performed for a decade. Her countless entries in the Oricon Weekly Chart have proven that, together with her many sold out concerts and shows!

We at J-Experience got a chance to sit down with the star for an interview, so here you go!

Q: Would you tell us a little bit about your 10th anniversary concert, and your personal feelings when you performed for your fans, whom were there with you to celebrate at the Nippon Budokan (indoor arena)?

In 2015, I celebrated my 10th anniversary (since my debut). From 2014 to 2015, I actually had my World Tour, and Singapore was one of the stops for it. I am really happy and grateful for the chance to meet many of my fans during the world tour and to be in Singapore to perform a one-man live.

Q: Currently, you are a really popular artist and an inspiration to a lot of people. When you were starting out, whom and what were your inspirations to start a career in singing?

Amuro Namie –a very famous singer in Japan – was, and still is, my inspiration to start singing. When I was young, I would see Amuro-san performing. At that time, I felt that it would be really great if I could sing and perform like her. That really inspired me to try and achieve my dream as a singer.

Q: Your song “Yoake no Logos” – the second opening theme song for the anime, Aquarion Logos – is coming out really soon, can you share with us more about the single?

This song, Dawn of Logos, is a really expressive song. I put in a lot of feelings when I delivered the song; it illustrates and brings out the lives of the anime characters. I also feel that I can really relate to this song through my own daily life experiences.

Moving on into my second decade, this song also represents how I want my style of music to head as well as how I want to aim for further heights.

Q: You have been a regular Anisong artist at Anime Festival Asia since 2008. Which ‘I Love Anisong’ concert did you find the most interesting and why?

It is really difficult to choose one single year. I feel that each year is a different presentation of the anime industry. However, last year, there was this main call where they chanted, “May’N! May’N! May’N!” until I came on stage. That was something that I felt to be really touching and I hope to be able to emulate the fans and give better performances.

What motivates you to sing more Anisongs (anime songs)?

The number one reason that I get to meet so many overseas fans is all thanks to Anisongs. From now on, I want to work even harder and produce better songs so that I would be able to meet more overseas fans.

The first time that I got the chance to perform overseas was in Anime Festival Asia 2008, and it was my first time going overseas as well. I also heard that the Japanese culture is really popular overseas and in Japan as well, the subculture is becoming stronger with each passing year. I feel that it is also all thanks to how the overseas fans are giving their support for the anime industry. The support for both me and the industry really motivates me to give my all in singing and performing more Anisongs.

What challenges do you face as a singer?

I don’t really face a lot of difficulties as a singer. For this year, the challenge would definitely be preparing for the 10th anniversary. However, during spring, I was actually hospitalized as I had some throat problems, but I managed to recover just in time for the Budokan Live. After that, I was able to come for Anime Festival Asia 2015 in Singapore. I regretted not taking care of myself and getting hospitalised because of my throat problem. It really made me think about how I want to move on in my career and present a better self to all my fans.

Q: How do you think your music style has changed over the years?

Ahhh, how has it changed?

The May’n that you guys see right now is very real to how I am like offstage. When I first started off, I was the singing voice for Sheryl Nome in Macross Frontier. The character is a very sexy and feminine character so I would think of ways to bring out the sexiness in my singing, as well as how to close the gap between myself and Sheryl.

Now, I feel like I have made many new comrades who I can share a bit of my real side in my music. I feel that now I am able to perform really comfortably as May’n and present a real side of me to my fans.

As I was performing at a school festival, even people that have not heard of the name “May’n” before would be able to become more excited and happier about my performance coming up on stage. I feel that this increase in excitement and anticipation led to me becoming more confident in being able to perform in front of them.

Q: We know you love anime so do you have a favourite character? Is your love for anime why you continue your music career in the anime industry?

There are definitely anime shows that I like. For example, I will take the time to really watch all the anime series that I have helped produced – such as Macross Frontier, and Aquarion Logos. However, personally, I tend to like animes such as IdolM@ster. (laughs)

I feel that the May’n you see now is all thanks to the chance of being able to get involved in so many productions of animes. Therefore, I feel that, from now on, I want to like anime even more and more, and hope that more and more people would be able to like anime together with me.

Q: You said that you like IdolM@ster; can you talk more about the reason why you like the anime?

For IdolM@ster, I really like the Cinderella Girls series very much. I feel that they are really similar to how my life is like. When I stand on stage, I feel really happy and touched when my fans support and cheer for me. No matter how many times I step on to the stage, I always get excited each time. Likewise, there were definitely times where I have shed some tears and become a little stressed over how some of my performances were like. The realism of the series is why I like it.

Q: What was most memorable song you sang and where was it?

This answer probably won’t change. It will probably still be the same answer – the song “Diamond Crevasse”. It was during the period when I changed my stage name to May’n so at that point in time, I did felt a lot of insecurities but it also meant that I would be having a new start from then on. That’s why “Diamond Crevasse” will always be the most memorable to me.

Since then, I have gotten many opportunities to have world tours and participated in many events. It also led to my participation in AFA SG 2008 – my first overseas performance. I feel that the moment when my fans actually sang with me in Japanese was really touching. From then, I have felt the real love that fans have for the anime as well as her songs. It is something that I want to keep close to my heart and in my performances from now on.

Q: For your birthday, your staff did a special event for you. Can you tell us more about it?

It’s not really an event the staff planned out for me but it was more of a private affair with my very good friend. During my birthday, when I finished work and went over to my friend’s house, there was already a taiyaki board made up in the house. Since I really like taiyaki very much, I actually snapped that and posted it on my Twitter.

Thanks for the interview, May’n!

With already 12 singles, 4 albums and countless of other productions under her belt, May’n just cannot stop creating wonderful music for us. Her 13th single, Belief, the opening theme for the now airing anime Taboo Tattoo, will be released on the 24th of August. Please do continue to support her as she moves on to her second decade!