[AFASG’15][INTERVIEW] AIMER: HER VOCAL CHORD INJURY – A TRAUMA OR BLESSING?

[AFASG’15][INTERVIEW] AIMER: HER VOCAL CHORD INJURY – A TRAUMA OR BLESSING? 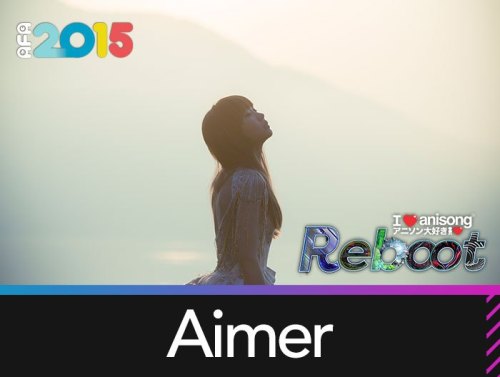 Musically talented and incredibly intellectual, we present to you, the rising star that is Aimer!

Aimer (エメ), pronounced eh-meh, first debuted with Sony Music Japan in 2011 with the song “Rokutousei no Yoru”, the ending theme for the anime, No.6. She continued to gain traction as she released more singles for various anime, notably “Re: pray” – the 29th ending theme for Bleach – and “Brave Shine” – the 2nd opening theme for Fate/stay night: Unlimited Blade Works.

In 2014, she released her 2nd mini album, Dare ka, Umi wo – her first collaboration with the music powerhouse, Yoko Kanno. This year, Aimer released her highly anticipated 3rd album, DAWN, which claimed the 4th position on the ORICON charts.

Aimer was here in Singapore to perform for the I LOVE ANISONG: Reboot concert. We sat down with the demure, soft spoken musician, who shared with us about her music, her dreams and the accident that resulted in the husky voice we all love so much.

Q: How are you feeling for your first live tonight in Singapore?

It’s an honour to be here to sing in Singapore but I am a bit nervous. I am really looking forward to it though!

Q: You first shot to fame with your song “Rokutousei no Yoru” from anime series No.6. Looking back, how do you think your music career has evolved since then?

Although I started my music career with gentle, relaxed songs, ever since I started working with Sawano Hiroyuki-san, I gradually started to work on strong, rock songs. Now, I have learnt to master both types of songs, not just gentle or relaxed songs.

Yes, all the songs are connected and they all have the theme – a midnight walk – in the lyrics. “AM02:00” was actually the first song that I wrote and it was my first try at the R&B genre. It was very well received by fans so when I created an album, I decided to continue the series of songs.

Q: Your live tour, Dawn, just ended last month. How do you feel about this tour and what have you taken back from the various performances?

Dawn represents the end of the night. I was able to match my songs to the feelings of my fans much more closely than before through this tour.

Q: Can you tell us more about your “Live at Anywhere” project?

I have been participating in the “Live at Anywhere” project since my debut, even right until now. This project allows me to sing at any place I want and any song that I like. For example, I have sung at both an aquarium and a planetarium before. I plan to continue this in the future as well.

Q: What are the dreams or goals that you would like to achieve in your singing career?

The most important thing to me now is to continue singing in the future, for as long as I can. I also want to be able to respond to the different feelings of my fans, be it happiness or sadness, through my songs.

Q: Having grown up in a musical environment, has singing always been your dream? Who was the first person to inspire you to sing?

I have always loved singing since I was a child. It was my dream. “Tomorrow” – the theme song from the movie, Annie, was one of my favourite and beloved songs; I really admired the clear vocals from the song.

I really love the Japanese band Spitz, even now. They have really helped to influence my music.

Q: Who do you want to collaborate with the most?

I really respect many artistes so it really is difficult to narrow it down. For example, I love the vocals from One Ok Rock and EGOiST. I would really like to collaborate with them if I get the chance.

Q: You have incorporated English words into your lyrics and you used to live overseas, so where have you lived before and how has it influence you today?

I lived in Bristol, UK, for a while and that was where I experienced different kinds of music. I really liked listening to English songs, which is how I learnt the various tones and the pronunciations for the words. From there, I was able to incorporate the English words into J-pop.

Q: You have picked up multiple musical instruments since young. Do you feel that learning one instrument will help you to pick up another skill, such as singing, another instrument or composing?

Yes, I feel that it is related. I started learning the piano and classical guitar since I was young. While playing the piano, I would often play and sing at the same time. I even did that in public recitals, so I feel that this has really helped me become who I am today.

Q: Are there any other music genres that you would like to try? What are your favourite genres?

I don’t really restrict myself by the genre for the songs that I want to sing. As long as the song conveys sadness or happiness – the two main themes I mentioned earlier – and is sentimental, I would like to sing songs from those genres.

For the music that I listen to, I generally listen to rock, country and Electronic Dance Music.

Q: What are your expectations and ambitions for your upcoming Billboard Live Tour?

My album, Dawn, is the final chapter of the story that I have started since my debut. Through this end, I want to start on a new story, with the “Billboard Live Tour” being the introduction. Through this tour, I want to get closer and deepen the relationship with my fans. Given that it is a “Billboard Live Tour”, I feel that there is a very special and chic feeling (about the tour). Since it is a new style of live performance, I see it as a way to challenge myself.

Q: What was it like to work with Sawano Hiroyuki-san?

Through working with Sawano-san, I have worked on and released many songs, including Gundam Unicorn, and even a collaboration album. These songs are mostly strong and powerful rock songs, some of which only having English lyrics. Through this experience, I feel that I had acquired a new singing style.

Q: What are some of the challenges that you have faced during your singing career? What advice will you give to aspiring singers?

As a singer, I have performed on many stages and sang many different genres of songs. I feel that as a singer, it is important to understand your own songs and have a unique style of expression. So I would advise all aspiring singers to forge out their own style.

Q: What was the idea behind the name of your official fan group, Blanc et Noir?

In French, it actually means black and white, which is similar to my songs, which are about the light and the dark. I want to share this meaning with my fans.

It is also in French because my stage name ‘Aimer’ is also a French word.

Q: At the age of 15, you injured your vocal cords, resulting in your husky voice. Have you ever resented getting the injury or do you see it as a gift in disguise due to your fans loving your current voice?

At that time, it was a tough experience for me as I had lost my voice and was traumatized by it. But now, because of the incident, it has helped made singing an even greater part of my life and it’s the reason for my singing style right now. So it is actually a blessing in disguise.

Q: With that in mind, have you ever thought of fully repairing your vocal cords?

My vocal cords, at the moment, are still a little injured. If it gets worse, I will not be able to sing anymore. On the other hand, if it gets better, my voice will be completely different from now. This made me opt not to take up surgery as I feel that my voice is perfectly balanced at the moment.

Q: During LisAni, you performed with Kalafina. How do you feel about the collaboration?

While working with Kalafina, I realised that each one of them have their own unique voice and by singing with them, I realised the strengths and uniqueness of my own voice. This helped me to re-evaluate how I thought about my voice.

Aimer Billboard Live Tour to be held in March this year!

That comes to the end of our interview with the talented Aimer! Having been a really successful 2015 for her with the release of her 8th single and her 3rd album, as well as multiple live events, we hope that she can continue to shine like the light and release more awesome songs! Please do continue to support her!