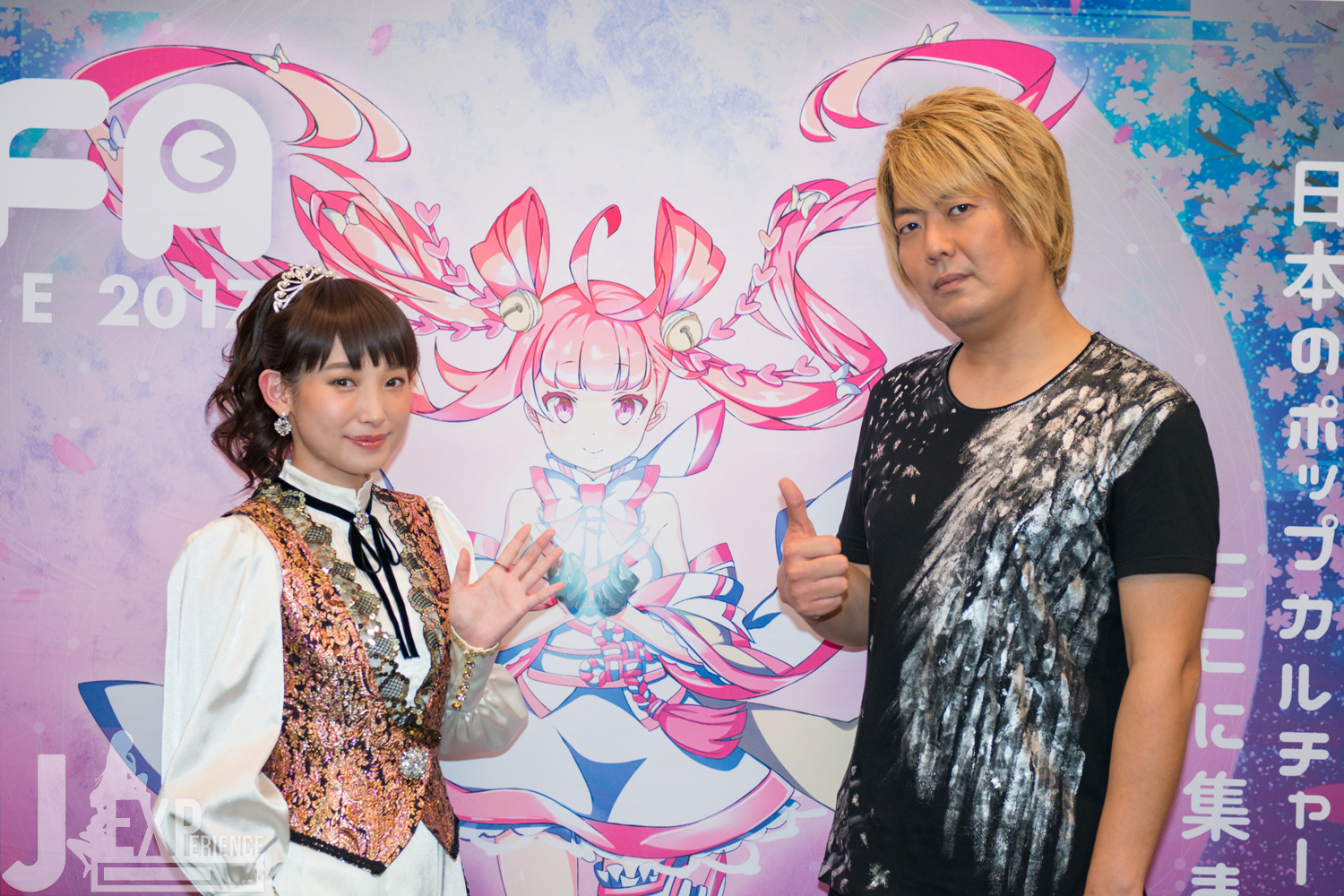 fripSide marked their 15th anniversary and is currently in the midst of performing their “fripSide concert tour 2017-2018” in Japan.

The first disc is a culmination of the first-generation fripSide self-cover songs by current vocalist Nanjo Yoshino (2009 – present) when nao (2002 – 2009) was their first vocalist.

Where freakSide (fripSide official fan name) were given the opportunity to vote for the first generation songs to be covered by Nanjo Yoshino.

The second disc consists of three new songs and a solo version “The end of escape” uniquely sang only by Nanjo Yoshino.

fripSide is widely known for the theme songs for TV anime “Toaru Kagaku no Railgun” franchise such as “only my railgun”, “level5 -judgelight-“, “eternal reality”, “sister’s noise”. And also the theme song “black bullet” from TV anime “Black Bullet”.

Satoshi Yaginuma (Sat) is the lyrics, synthesizers, composer, and arrangement for fripSide since 2002.

nao was the first vocalist and lyrics for fripSide but had graduated on 15th March 2009.

Later on that year, Nanjo Yoshino (Nanjolno) joined fripSide as the new vocalist and lyrics.

The word “fripSide” is coined by at and comes from “flipside” which means the “B-side of the records”. Speaking of why, both the B-side and A-side are the same. Sat wants to make all his music from A-side. Incidentally, the word “flipside” has already existed elsewhere. Thus, to prevent any trouble while searching on the internet, Sat decided to capitalize the “S” which means Satoshi Yaginuma himself.

We, at J-Experience, managed to sit down with the demure Nanjo Yoshino and mirthful Satoshi Yaginuma to find out more about their music, collaborations and what fripSide has stored for us in near future!!

Especially if you want to know why did fripSide introduced themselves as “We are angela!” during the concert live!

When fripSide sat down, a voice “fripSide!” came from the back.

And that was when Sat replied: “本物です! (It’s the real fripSide).

Everyone burst into laughter.

A: The upcoming new single is the opening theme of the TV anime Killing Bites. The story of the anime is about duels between human and human-animal hybrids.

(*As the keyword “duels” is being emphasized)

“killing bites” would be a rock type feeling kind of song so this is something new for fripSide.

And we hope everyone will enjoy it!

Q: Is there any chance that fripSide would be doing a collaboration with Altima?

Sat: It would be relatively difficult right now as it would be splitting me into the half.

Personally, to me, fripSide is fripSide and Altima is Altima. These two are both different entities, and I would want to separate and focus on them differently. However, a collaboration sure does sounds great. It definitely sounds like an amazing thing. We are definitely keen to try. Probably it’s something that everybody could look forward to in the future if there’s a chance?

Q: Please share with us your most memorable moments as fripSide.

fripSide: Both of us have lots of memories and experiences as fripSide. So it is very difficult for us to just choose only one.

Sat: This year is the 15th anniversary for fripSide, and it’s the 8th year for Nanjo-san since she joined. It’s really wondrous over these years. Not just only in Japan, but fans from overseas have been supporting our music, and loving our music. It’s almost as though it’s like a life full of a circle of smiles and joys. I felt that it’s a miracle that we have came this far, and had achieved these much.

Nanjolno: I’m glad and happy being able to collaborate with artistes such as seniors (senpai) like KOTOKO. Furthermore, with fripSide’s first vocalist, nao-san. During the 10th anniversary, for the Decade concert, it was a blissful moment to sing together with nao-san. This was something that is also one of the important moments for fripSide. And this year, it’s also our 15th anniversary. Everything is important!

Q: Since the very beginning, the fripSide’s music is composed by Satoshi Yaginuma. Can you please share with us about your process?

The room was filled with laughter.

Sat: It’s a battle between me and the computer (software). Until I’m done with the music piece, I will just keep doing it frantically till it’s completed.

Plus it takes lots of guts and efforts. I also shed a lot of my blood sweat and tears.

Q: fripSide is also known for doing theme songs for games. Is there any difference compared to anisong?

Sat: This is going to be more specific, supposedly yes, there is a difference between anisong and games. In terms of TV anime, the time that you would be allowed to compose is 89-89.5 seconds. And as for games, you are allowed to be given 1 minutes and sometimes maybe up to 2 minutes. Probably having additional/extra time or freedom to choose the timing, composing for games allowed us to express ourselves a little bit more, and a little longer. However, we are still anisong singers, so it doesn’t mean that we are prioritising games or anisongs. We still put a lot of passion into our TV anime songs too.

Sat ended this question off with: “We’re very serious about our jobs!”.

Q: How do you feel about coming back to Singapore again? Is there anything that you missed in Singapore?

Nanjolno: We’re definitely excited to be back in Singapore! And when we are moving from places to places on the bus ride, we also got to remember familiar places such as the Merlion, and water fountain. Every time we come back to Singapore, we get to add more memories to our previous one.

Nanjolno: I will definitely buy the sauce to bring back home, and try to cook it myself. I also liked the kaya jam.

Q: On some of the fripSide’s music videos, there were collaborations with comedians. Is there any special reason behind it?

Sat: It’s very simple! Simply why did we use comedians? Because they’re funny. And it’s also funny to use them for our music videos, right?

Sat: It’s true that maybe for some fans from overseas, they might not know some of these comedians because they’re more well-known domestically in Japan. So, we definitely do want to use comedians that might be known on a global scale. But maybe that’s in the near future because it’s a little bit harder to engage them because I’m sure that they’re quite busy.

fripSide proceeded to discuss among themselves.

Sat: Which comedian is popular like on a global scale? PPAP? (everyone laughs)

But Pikotaro-san is already in a music video.

Nanjolno: Probably we can do something funny actions together with them.

Sat: You guys can laugh a bit more you know? It’s okay.

Q: fripSide released their 7th album – crossroads – for your 15th anniversary and is currently still doing your Japan tour. Can you please share with us more information about your 15th-anniversary special album?

Sat: It has been 15 years since fripSide debuted. We wanted to bring back the previous old songs, so fans could fully experience who fripSide is now. Moreover, we did not just bring back older songs but have incorporated new songs too. On our website, Japanese fans were given the polling opportunity to vote or choose the songs for fripSide to feature. Overseas fans were also included too! Hopefully, everyone is enjoying it!

Q: What are the current goals for fripSide?

Sat: The hardest thing for any artist is to continue, it’s always easier to stop doing. So we hope even in the future, we will always continue as fripSide, continuing making music for everyone. Not only for the Japanese fans but for overseas fans too!

Nanjolno: fripSide is about Sato-san in expressing his music, and I will add the vocal to what he wants to express. When I first joined fripSide, having collaborations with comedians in the music video or doing surprises in the concerts. I was very surprised when I first heard these ideas. I hope that fripSide can continue to create music that our fans enjoy. These are our goals or will continue to do as fripSide.

Q: Do you have any unique experience during the collaboration with angela?

Nanjolno: angela is a very powerful duo group. And always have lots of energy when performing. However, when knowing them off the stage, they are very kind and gentle like お兄さん and お姉さん (older brother and older sister).

Sat added that: As angela came to Singapore quite often, and everyone should know how powerful and how much active angela had when performing.

Sat jokingly added on: In terms of the age, Nanjo-san is a little younger and perhaps should call angela as お爺さん and お祖母さん (grandfather and grandmother) instead.

Everyone is laughing uncontrollably

Ms Kyoko: Yaginuma-san isn’t trying to be rude but saying a joke.

Nanjolno: Did angela introduce themselves as fripSide when they were performing in Singapore? Like: “Hi, we are fripSide!”

Everyone: No…so far, not yet…

fripSide: So tonight, we will do that! Like: “Hi, we are angela!”. And maybe next time when angela come, they’ll do it too.

Ms Kyoko: If angela do that too, then you guys will know the reason why.

Sat: It’s not very common to see a unit duo with a male and a female. Just like that, angela is a very good rival and at the same time our great friends. We became great friends because we’re both rivals and creating music. And we both have a similar duo like a female vocalist and male composer.

Thus, this is the end of the interview with fripSide! And we laughed till our sides got stitches. Yaginuma-san is indeed very humourous! (LOL)

-fripSide went to introduce themselves as angela-

fripSide asked the audience for their favourite last song