[AFASG’15][INTERVIEW] MIKA KOBAYASHI: “I TRY TO IMAGINE MYSELF AS A TITAN”

[AFASG’15][INTERVIEW] MIKA KOBAYASHI: “I TRY TO IMAGINE MYSELF AS A TITAN” 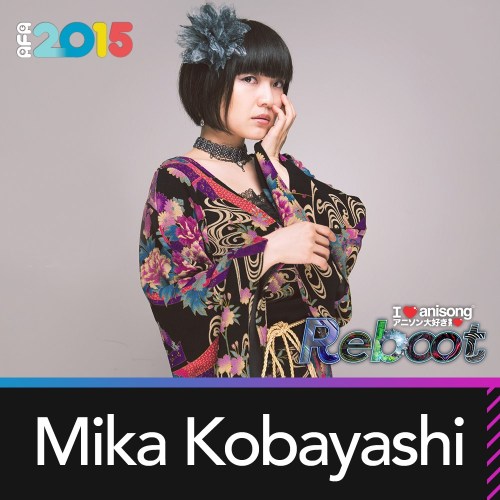 The last of our AFA2015 interviews, we bring to you Mika Kobayashi, featuring Tetsuro Shimaguchi!

Mika Kobayashi is a talented singer and songwriter, as well as a pianist. She started singing for the anime industry in 2010, providing her strong vocals for many theme and insert songs – such as “βios” for Guilty Crown and “Before my body dry” for Kill la Kill. Her latest work is “Through my Blood” – a collaboration with Aimer in the Koutetsujou no Kabaneri Original Soundtrack.

Relatively unknown is her own original compositions – songs outside of her anime works. She writes and composes her own songs, which are usually melancholic in nature and thought-provoking. She is acclaimed for her powerful live performances, having performed in Japan and parts of Europe. She likes to collaborate with people outside of the industry – her latest partner being Tetsuro Shimaguchi, or KAMUI-san.

KAMUI-san is known as the Samurai Sword Artist, where he mixes beauty of form, acting, music and martial arts. He graduated from Nihon University College of Arts and has plenty of experiences in theatre and choreography – most notably having choreographed the fighting scenes in Kill Bill Vol.1.

On working with Sawano Hiroyuki-san:

Q: How do you feel about working together with Sawano Hiroyuki (composer)? Can you share your experiences working with him?

Mika: To me, Sawano-sensei is a very interesting person! So the recordings sessions that I do with him are always energetic and fun! His songs are also pretty cool. I really enjoy looking at the many different sides of Sawano-san.

Q: You are well-known for your music with Sawano-san. Do you think this music style will affect everyone’s impression of the kind of music that you are capable of singing?

Mika: As a vocalist, my horizons have really been broadened by having been able to collaborate with Sawano-sensei. The collaboration has changed how I approach and express my music positively. However, I find that the two are mutually exclusive.

On her music in general:

Q: How did you develop your style of singing?

Mika: For the songs that I compose myself, I will just sing it as it is. I would think about how and what I want to express through the songs. I would then digest all these information and then proceed to sing the songs.

Mika: As for those anime songs, I actually got suggestions from Sawano-san saying that he wanted the song to be sung in a certain way. For example, for the song “βios”, he wanted it to have a German traditional feeling. Whenever I record songs that are upbeat and of the rock genre, I would imagine myself fighting on the battlefield.

Q: What kind of image do you think your songs convey?

Mika: My songs usually convey the deepest feelings of how is it like being a female. I also try to bring out the beautiful sceneries of Japan and how I, myself, have grown up being Japanese. That’s what I try to inculcate into my songs.

On her experiences in singing for various Anime series:

Q: You have sung quite a few songs for a number of anime series – such as Aldnoah.Zero, Guilty Crown, Shingeki no Kyojin, Kill la Kill and Mobile Suit Gundam Unicorn. Which is your favourite series?

Mika: (laughs) that’s really difficult! I really like all the songs so it is really hard for me to choose! But, let’s see… For the song for Shingeki no Kyojin, when the titans appear onscreen, I was told to sing out the feeling one feels when they emerge out. That doesn’t really happen in real life so I remembered having a lot of fun trying to imagine how that feeling is actually like. Not only that, when I perform lives, I try to imagine myself as a titan when I am singing the song. (laughs)

Q: Given a choice, would you like to sing for an opening, insert or ending song for an anime series?

Mika: For the songs that I have sung until now, fighting theme songs are the bulk of what I sing. It would be great if I got the chance to sing for something more fantasy-themed but I am a little worried whether my voice would actually fit that kind of theme. If I do get to try it, it would be a great way to know if I am able do that kind of style as well.

Q: Do you have difficulty singing English or German songs, for example, in Kill la Kill or in Shingeki no Kyojin?

Mika: It is indeed really difficult to sing in other languages beside Japanese! Especially for the small differences in the nuances and pronunciations, the way the breath is being used, and the shape of the mouth when singing. I try my best but sometimes, I do get frustrated when I can’t get close to the native pronunciations.

Q: You have sung a German song –Bauklötze – for Shingeki no Kyojin. Can you speak German or did you just learn German to sing the song?

Mika: No, I can’t actually speak German before singing this song! Sawano-san actually told me that he wanted the song to be something like a chant, something that sounds very monotonous. He felt that in Japan, people can’t really speak the German language; it’s not that widely learned. Therefore, he felt that if he had chosen to use German, it would bring out a stronger chanting rhythm.

Mika: When I record the songs, I actually just look at the katakana that was printed below the German language. So if you actually give me a German passage or a phrase in romanji and ask me to read it, I’m sorry but I am unable to do so! (laughs)

On her collaboration with KAMUI-san:

Q: You are known to be the Samurai Sword Artist in Asia and you pursue the mixing of styles with samurai swords. Can you tell us more about this concept?

Tetsuro: At the very beginning, samurai styles were only brought out in movies and stage performances. It is usually part of a big story and doesn’t really get the limelight. By mixing it with different kinds of music and mixing all the different styles together, I feel that I am able to put more life into it and I can put the focus more on the samurai style itself. That’s how I decided to mix it together with different music and create my own style.

Tetsuro: The mixing of samurai style together with music is also something similar to what Kobayashi-san said. It is about what l feel each time when deciding the concept to go with. I try to bring out the beauty of the whole culture, so I thought mixing it with music would make the samurai style more wholesome and full.

Q: How did the collaboration (between Kobayashi-san and Tetsuro-san) start?

Mika: At the very beginning, our first contact with each other was when we were shooting for a television programme, and that was the first time we got to see each other. That was where I thought of collaborating with KAMUI-san and I approached him first. The songs that I make, sometimes, even the Japanese do not get the songs’ expressions and feelings really well – such as how a boy and girl relationship can sometimes get really sad and bitter or about the deeper feelings of living on this world. Therefore, I felt that if I actually get to collaborate with KAMUI-san, maybe I can get my music to reach out to more people.

Tetsuro: Since 6 years ago, we started to perform together in countries, like Italy and France. Every time I do the performances with Kobayashi-san, I really like the unique world view that she brings out in her performances. I sort of get poisoned by her performances, in a good way, (laughs) and that is how we have been continuing our collaboration.

Q: If you were given a chance, which other composers would you like to work with?

Mika: Just like how I am currently collaborating with KAMUI-san, I want to collaborate with people from outside the music industry – something different and out of the box. As such, I feel that I can broaden my perspective of how music can be done.

Although she won’t be joining us at AFA2016 this year, we certainly hope that she will continue to lend her strong vocals to more anime songs! We can’t wait for what exciting collaboration she has for us in the future. Please do continue to support her!