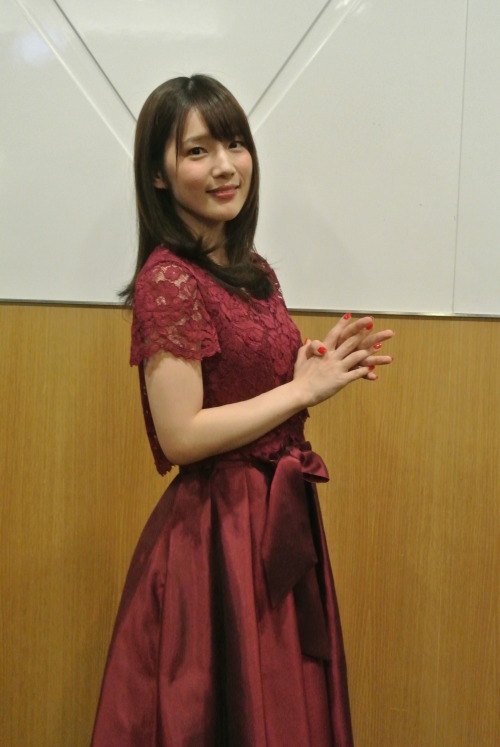 Having voiced many chuunibyou characters, Maaya Uchida, already in her mid-twenties, wants to graduate from it!

Maaya Uchida first made her voice actress debut in 2010. In 2014, she won the Best New Actress Award at the 8th Seiyuu Awards. The talented voice actress is most famous for her role in Chuunibyou demo koi ga Shitai! as Takanashi Rikka and more recently, as Kanzaki Ranko in IdolM@ster: Cinderella Girls!

At Suntec Fountain of Wealth (Source)

Here in Singapore to perform in her first overseas concert, we sat down with the voice actress to talk about her career, her future plans and even, shhh, her secret IdolM@ster crush.

Q: Are you currently focusing more on your singing or voice actress career?

To me, both are equally important – being a singer and a voice actress. However, I am currently focusing more on being a voice actress, as if I stop being one, I feel that I might not have the opportunity to sing as well.

Also, I want to continue to do my best in passing as many auditions from now on, so please continue to give me lots of support!

Q: You have had success through many media genres like gravure, TV, radio and anime. Which do you think has contributed the most to your success?

Hmm…, this is quite hard to decide! I feel that being a voice actress made me who I am today. I heard people in Singapore watch a lot of anime and as a result, I find that more people recognise me for the anime characters that I play as a voice actress. Being a voice actress has allowed me to receive many opportunities to do live performances, gravure and even radios.

Q: Last year you won the ‘Best New Actress’ Award at the 8th annual Seiyuu Awards. What character that you’ve voiced are you most proud of?

Maaya: Hmm, I feel that the character that I am most proud of is Takanashi Rikka from ‘Chuunibyou demo koi ga Shitai!’ It was an anime which I got to work on during the early stages of my career as a voice actress. Through working on the anime, I got to experience many different things, both happy and sad. It’s thanks to that anime series that made the Maaya Uchida that you see today.

Q: You have voiced some ‘chuunibyou’ (eighth grade syndrome) characters like Ranko, from The IdolM@ster: Cinderella Girls, and Rikka. How do you feel when you voice such a character and do you have such a personality?

*Laughs*. I want to graduate from doing chuunibyou characters as I am already in my mid-twenties! However, I am really happy to be able to play those characters because I can relate well to them and I think I am somewhat similar!

I have a good friend, Uesaka Sumire, who is currently in the ‘chuunibyou’ phase. The characters she voiced, such as Anastasia, from the IdolM@ster: Cinderella Girls, and Dekomori, from Chuunibyou demo koi ga Shitai! , are chuunibyou as well! Every time I do recordings with her, I would feel relieved as she would encourage and tell me it’s alright to act in such a way. I actually get a lot of support from what she says, so it would be great if I could continue to voice such characters!

Q: What do you look out for when you voice act? Do you take a lot of time to study the characters?

When I get the chance to play various characters, I don’t really look at what they are thinking about but more of how people see those characters.

For example, a chuunibyou character will think that they are correct and that they are not doing anything wrong, but people around her will be like “Ah, this person is delusional”.

I will try to bring out this difference in opinions and perceptions out in the characters that I play when playing such roles.

Q: If you want to challenge yourself, what kind of personality would you like to voice act as?

I find that the charming point of being a VA is the chance to act as different characters from different genres. It is quite a rare case (in the industry) but I would like to play a male character in the future.

Q: Do you have any characters that you would like to voice but haven’t done so before?

Hmm… maybe a youkai? (A ghost; or a traditional Japanese old folktales character) Or a frog? Or maybe a small living creature like Totoro? I would definitely like to try to voice non-human roles though!

Q: Most of your voice acting roles for video games from 2013 to 2015 were for Role Playing Games (RPGs), are there other video game genres do you take a strong interest for?

Puzzle games! I actually like to play a lot of puzzle games such as Puyo Puyo (a puzzle game developed by Sega). Therefore, I would like to try voicing such games as I think it will be really fun if I get to play the voice for when people get a lot of combos. So when they combo, my voice will appear and it will be great! (Laughs)

Q: You have played as Hiroyo Hakase in Hikonin Sentai Akibaranger, so how does it feel like to act in front of camera in addition to using your voice?

Before I got and played the Akibaranger role, I had to practise my voice projection for the role. Let’s say if I was speaking to someone at the back of a room, I would be speaking in a loud volume. On the other hand, when I do voice actress recordings, the microphone is just in front of me, so I will tend to just talk into it. The distance between two people when they talk, the volume and the tone of voice that I should use is something that I really learnt from playing a live action role. I also learnt that I have to act using my whole body to bring out the character in a show.

Q: Currently, IdolM@ster has become a really popular anime, and since you voiced Kanzaki Ranko, which one is your favourite idol besides Ranko and how does it feel like performing with other voice actresses?

The whole atmosphere of the recording studio is like a girl’s school because there are many girls around. We get to go into the studio and we can even walk bare footed. It is a very relaxing atmosphere and there would be delicious food to eat frequently. We will just sit around and chat, and munch on the food.

During the Christmas period, there was a recording as well, so we actually had cakes and chicken! (A Japanese tradition) We were just chatting about the show, the recordings and how we should all work hard together for the upcoming episodes as well. It had an after school activity kind of feeling in the recording studio!

As for the characters that I like, they are Momoboshi Kirari and Sachiko Koshimizu (she wore similar clothes to the character on that day), but I didn’t tell their voice actresses that I like them so it is a secret!

Q: In IdolM@ster Cinderella Girls, the character you voiced, Kanzaki Ranko, was initially assigned a debut song which was about gothic and horror. However, it was discovered that she was bad with horror so they change the song to be about a fallen angel instead. As a recording artist, do you know if this sort of thing actually happens in the industry and has it happened to you before?

I feel that what happened to Ranko could possibly happen in the industry. For IdolM@ster itself, both the producer and director – the creators of the anime – and the voice actresses have very strong opinions. So whenever one side thinks that, “Why not this line if we were to change it, it will bring out character better”, we will actually discuss how we can make the anime better and the lines do get changed. For the songs, the same process happens again.

It is quite an open discussion where we get to give our thoughts of the roles and stuff and that’s how we try to make IdolM@ster better. Hence, I feel that it is quite possible for it to happen in other anime as well.

Q: As this is your first performance overseas, what are you looking forward to?

Maaya: Basically, for my first time overseas, I would like to buy some souvenirs back for my friends and family. I’m actually looking for suggestions on what to buy for my grandfather! Maybe someone from the crowd can recommend me something that is not too sweet? (Laughs)

Together with other Pony Canyon Artistes for P’s Live (Source)

That comes to the end of our short interview with the one and only Maaya Uchida! She has just released her very first album, PENKI, earlier this month on 2nd of December, which is a collection of her progress since 2014, when the project started. So please, do continue to show your support to her!