[INTERVIEW] WAKE UP, GIRLS！― WE CAN OVERCOME ANYTHING TOGETHER!

[INTERVIEW] WAKE UP, GIRLS！― WE CAN OVERCOME ANYTHING TOGETHER! 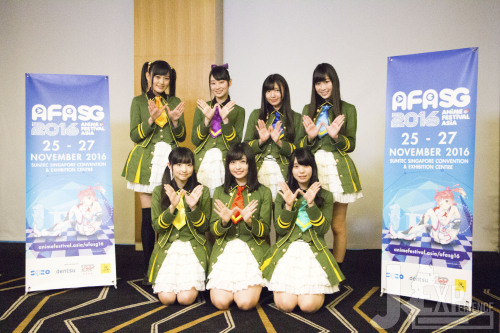 The up-and-coming idol group – that is Wake Up, Girls! (WUG) – recently graced our shores to perform during the Anime Festival Asia Singapore 2016’s I Love Anisong Concert! The seiyuu unit is made up of seven cute and bubbly members, namely – Mayu Yoshioka, Airi Eino, Minami Tanaka, Yoshino Aoyama, Nanami Yamashita, Kaya Okuno and Miyu Takagi. Having already an Anime series and 3 movies under their belt, the group recently performed “Bokura no Frontier” – an ending theme – for Shakunetsu no Takkyuu Musume! The group is no stranger to performing on the big stage – with performances at the Animelo Summer Live as well as in the United States! We sat down with them to find out more about their music, the anime and who is the best at Table Tennis.

Q: Please tell us more about your latest single – “Bokura no Frontier“.

Mayu Yoshioka: I feel that this is the perfect song to be an ending song for an Anime. During the recording, we had some difficulties for the first part before the chorus. The good thing about the song is that as you approach the chorus, it’s almost as though there’s an explosion – you could feel a burst of fresh air and see a clear blue sky. That part is something that we really enjoyed about the song.

Q: What is your favourite WUG song?

Nanami Yamashita: “Beyond the Bottom” is my favourite song as I am voicing the character, Nanami Hisami. In the first part of the movie, you can see that Nanami is starting to show growth and you can see her grow as a person, which transited beautifully into the second part. Her growth is something I feel very close to. That is why “Beyond the Bottom” is my favourite song.

Note: Beyond the Bottom is also the name of the 2nd movie.

Minami Tanaka: “Tachiagare!” is my favourite song! It is our first song, which is like our “roots”. Every time we perform the song in lives, a fiery passion will kind of burn inside of me. When I am singing it now, it makes me feel so calm, as it is something close to my heart. I also really love how responsive the fans get when we sing this song!

Mayu Yoshioka: I also like “Tachiagare!” too! It is not just because the song is our roots, but it is like our signature song – you can always relate “Tachiagare!!” to Wake Up, Girls!. This is something that is really important to us. Every time, when we hear the recording (of Tachiagare!), we can see how much we have grown as a group, which is something amazing. Whenever we perform this song at our live performances, you can notice how much we have developed. This feeling is something I really hold dear to me.

Airi Eino: “16-Sai no Agape” is my favourite song! This song is not related to the Anime, but is used more for performing. Thus, I think not many Anime fans might know about this. However, this song is very cute and is based on a high school setting. It is a very bubbly song and is sung by my character – Airi Hayashida. I really recommend this song! So if you do not know about this song, do listen to it!

Kaya Okuno: I also like “Beyond the Bottom!” You can tell from this song that despite all the hardship, WUG can carry through. You can also feel the power within the song. It is a really encouraging song.

Yoshino Aoyama: I recommend all the songs the other members have mentioned before! However, since it is a great opportunity for everyone to learn more about Wake Up, Girls!, I will choose a different song – I would recommend “Gokujo Smile”. When you listen to the music, you realised that has a very upbeat and pop-like music. However, when you read the lyrics, you actually realise that it is rather dark and negative, with lyrics like – “It’s really very hard” and “I want to cry”. The fact that we were singing it so positively, it is almost like an encouragement. This song is very reflective of us as a group, despite all of us having hardships to carry through. Thus, I really recommend this song!

Q: Why did WUG decide to sing for an Anime – Shakunetsu no Takkyuu Musume – instead of choosing to use that song – “Bokura no Frontier” – for themselves?

Q: Who is the best in Table Tennis among the WUG members? (Note: Some of the WUG Members voiced in the TV Anime Shakunetsu no Takkyuu Musume, and have also participated in various Table Tennis related events.) Everyone: Minami Tanaka! After the recordings, she would always continue practising Table Tennis. Thus, Minami is able to serve better and rally more.

Minami Tanaka: So, at this point, I guessed I am the best, right? Everyone: Okay, we got it, alright.

ON THEIR LIVE PERFORMANCES

Q: This is your second time going overseas and your first performance as a group. How do you all feel about performing overseas?

Mayu Yoshioka: Our first performance overseas was in Chicago two years ago, where we had a small live. However, the live occurred right after the screening of the Wake Up, Girls! Anime, therefore, we did not have many songs that we could sing. Now, after both the anime series and movies have finished, we feel that we are more complete and have much more to offer to our fans.

Q: Do you have any interesting behind-the-scenes stories to share during the WUG 3rd Live Tour?

Mayu Yoshioka: This was before our Okinawa performance. Just two minutes before going on to the stage, Miyu started to eat her bento. That was really interesting!

Mayu Yoshioka: Another one happened on the stage. The song, “Higawari Princess”, means that the princess will change every day. Likewise, we did that on stage, where the centre was changed each week, which felt like there was a different princess for each of the live. This concept is something new and interesting, so we hope that our fans were able to enjoy something different.

Q: Do you have anything special prepared for the Festa. 2016 SUPER LIVE concert in December?

Mayu Yoshioka: For this concert, not only will Wake Up, Girls! be performing, our rivals will also be performing too! The fact that we are able to have a concert in Makuhari Messe with the entire cast is almost like a dream come true. It also kind of relates to the Anime, which is a huge turning point for us.

ON THEIR ANIME SERIES

Q: How does WUG relate to their respective character in the Anime?

Airi Eino: I am actually from Sendai in Miyagi Prefecture, where the anime is based on. I was living in Sendai when I did the recording for the anime. I realised that the city and everything (in the Anime) looks exactly like Sendai. When people, who after watching the Anime, goes to Sendai, they would probably notice a lot of similarities, like – “this is where they were” or “this is where they walked”.

Besides the landscapes, the fact is that we are idols too. Even in the anime, the characters are also going through the same hardships as us; they are still trying to work towards their dream. This is something that we felt which is similar between the Anime and us.

Q: Can you please share with us your opinions on your own WUG character?

Yoshino Aoyama: My character, Yoshino Nanase, started off as a cool beauty, then because it’s like a “hyperlink”, the characters will start to reflect us in real life as well. She started changing from a cool beauty to someone who isn’t really a cool beauty.

Kaya Okuno: You might be a little scared about Kaya Kikuma because she might come off as a little bit scary. However, in fact, she is actually really passionate person and you will actually realise that she is a great woman.

Airi Eino: The Airi Hayashida that I have portrayed might come off as a very normal person, almost as somebody you can relate to. She cannot really sing nor dance. Sometimes, she starts questioning whether she should continue doing this or not. However, in the recent Anime, you can see how much she has grown. Therefore, she is someone I believe the viewers can easily relate to.

Mayu Yoshioka: My character, Mayu Shimada, came off as a little mysterious and people can’t really wrap their heads around her. As you keep watching the Anime, you will start to see that she is actually quite feminine and start to grow closer and closer to the group. For myself, as a personal fan, when I see her grow and become more open with everybody, I feel really happy for her.

Minami Tanaka: Minami Katayama is almost too good to be true! She is almost like an angel, and she is kind of like the “imouto” (younger sister) character in the group. She is very well-taken care by everybody else. But little did you know, she is also watching out for everyone else too. She is a really sweet person!

Nanami Tamashita: As Nanami Hisami is the shortest and youngest in the group, you would kind of expect her to have the “imouto” type of personality. However, she is slightly snobbish and is like a lone wolf type of girl. However, as the story progresses, you would realise that she has a lot of love to offer. She is like a “Tsundere” type of character.

Miyu Takagi: Miyu Okamoto is more of the mood maker and is the funny character in the group. Sometimes, her humour might be quite questionable. She has a very good comedic relationship with Kaya. I feel that Miyu does a very good job being the “boke”. (Usually in Japanese comedy, a boke is the person that is acting a little not too smart, which would lead to another person hitting on that and asking out loud “what is he/she saying?”)

Q: Is there any difference between being idols in the Anime and in real life?

Mayu Yoshioka: We are still in the process of becoming an idol. This is something that we are still working on together as a group. We actually had to do intensive training such as singing, vocal and dancing lessons. Sometimes, we were so surprised that we also had to do abs workout, that we would ask, “We need to do these much!?”

However, as we were together as a group, the trainings were something we could overcome together.

LASTLY, A MESSAGE FOR THEIR FANS

Q: A Message to the fans, done in English!

Miyu Takagi: Hello… Hello… We are Wake Up, Girls! Thank you for everything. We love you!

We hope this short interview session will allow you to get to know your idols better. In 2017, Wake Up, Girls! will be having their 2nd season for their Anime series, so please do continue to support them! We can’t wait to see what else they have to offer in the future!