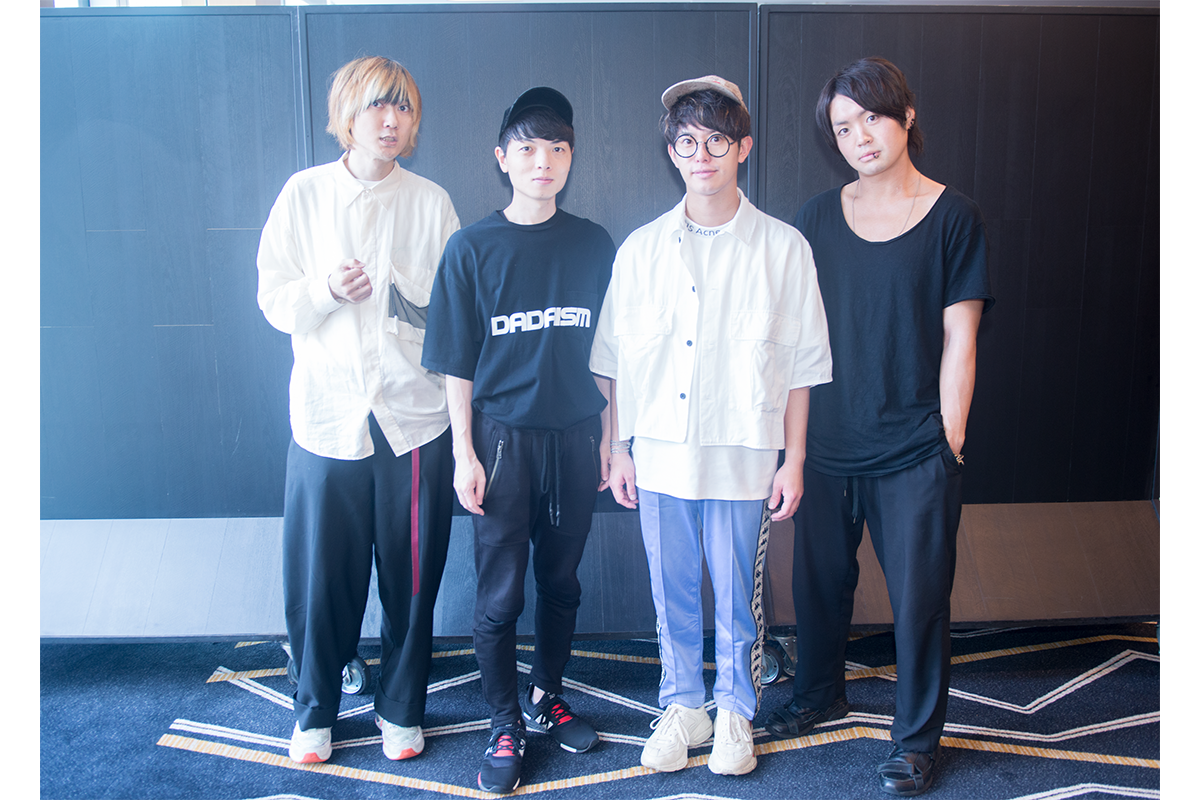 BLUE ENCOUNT is a four-piece band hailing from Kumamoto, consisting of Shuichi Tanabe (Vocals and Guitar), Yuya Eguchi (Guitar), Yuta Tsujimura (Bass) and Yoshihide Takamura (Drums). Describing themselves as an “emotional rock band”, they hope to unite their audiences with their passions and emotions.

Debuting with the EP “Timeless Rookie” in September 2014, the group wasted no time by following up with their first single, “Motto Hikari wo”, which received extended plays in 35 radio stations across the country. They then ventured into Anisong, collaborating successfully with famous Anime series such as Gintama and BANANA FISH.

In 2016, they released their first major album, “≒” (Nearly Equal) and has since gone through a period of evolution with the release of their 3rd album, VECTOR, in 2018. The quartet has also enjoyed considerable success performing live, rocking venues such as the famed Budokan and Makuhari Messe.

In 2019, they celebrated their 5th anniversary since their debut, and their 15th as a band. We at J-Experience managed to sit down with the quartet to get their thoughts on their music and their future plans.

Which was BLUE ENCOUNT most memorable live?

Nippon Budokan, as it has a very spacious live area. Definitely the most memorable live for us.

Were there any differences/similarities in producing songs for Anime?

Shunichi Tanabe: But when it comes to animation songs, we have to cherish the world that the animation is trying to depict. So, the first thing we would do is to watch and review the world of the Anime before trying to write the songs.

Please share with us something interesting in the making of “Polaris” music video.

Yoshihide Takamura: The shooting for the music video took place on the cliff itself and it was a really steep cliff. When we did the shooting, we placed the drums set very near to the edge of the cliff. So personally, as the drummer, I have a fear of heights, so it was a very scary experience for me.

Your first Anisong was for Gintama, can you share with us what kind of existence is “Gintama” to BLUE ENCOUNT?

Shunichi Tanabe: I started to read the original book of Gintama and enjoyed the animation of Gintama since I was in high school. Gintama also helped me got over a time when I was hurt, therefore, Gintama is very important to me.

So, when I heard that we had the opportunity to deliver a song for Gintama, I felt that it was a kind of destiny or fated encounter.

What is the next milestone that BLUE ENCOUNT want to achieve?

Similar to our live in Singapore, we would like to perform more in Asia. We would also want to become a band that gets invited to perform in the United States and Europe.

What relaxing activities does BLUE ENCOUNT do in your free time?

Note: Each members’ activities were answered by the group for each other, sort of like a comedy routine.

Yuta Tsujimura: He is a runner, and he practises the bass.

What motivates BLUE ENCOUNT to continue what BLUE ENCOUNT is doing right now – fans, passion or other factors?

Shunichi Tanabe: Of course, passion for music is our number one motivation. However, we cannot discount the support from our fans. Whenever we perform on the stage during live, we use the venue to let go of all the stresses that we hold inside. This is our charm to continue performing live.

Please share with us any interesting happenings during your BLUE ENCOUNT 2019 Tour.

Shunichi Tanabe: As an artiste, we usually wear the earphones, or ear monitors, while doing our performances. When we were going to perform the first song, Yuya Eguchi, who was the guitarist, suddenly shouted, “Please wait!”. Then we found out that he had forgotten to put on his earphone, so we had to stop the live tentatively and wat for Eguchi-san to go back to the dressing room to pick up his earphones.

This incident happened during a recent live and we had to restart the live. It was quite the ordeal

With dreams of performing on a global stage, we at J-Experience know that BLUE ENCOUNT won’t be stopping anytime soon! With their passion for delivering mesmerising performances and simple yet emotional music, we can definitely expect more from the quartet in 2020!