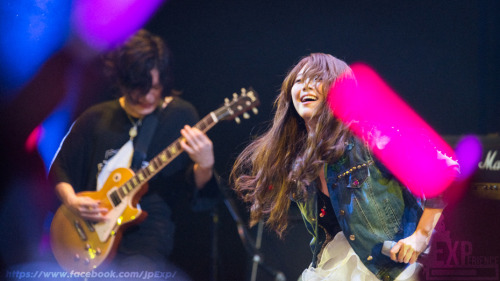 The pretty singer and voice actress made her fourth stop on our sunny island and wow the crowds with her own original songs, as well as a few numbers from her biggest project to date – Love Live!

Pile, whose real name is Eriko Hori, shot to fame with her portrayal of Maki Nishikino in Love Live!, where she was ushered into the spotlight after a rough start to her career.

The anime project not only just kickstarted her music career; it gave her quite a following too, with many supporting her solo debut!

The Asia Tour consisted of a concert as well as a meet and greet session with the fans, where fans can interact with Pile through mini games such as Rock, Paper, Scissors!

For the meet and greet sessions, there will be lucky draws and game segments for the fans to win exclusive items or a photograph polaroid chance with Pile herself!

She also held an on-stage interview with her fans and below is a snippet of it:

Q: This being your first time in Singapore, what is your impression of it?

Pile: The first thing that comes to mind is definitely the Merlion! It is also very clean and has really nice scenery!

Q: Have you met any Singaporean fans in Japan before?

Q: Having came from an anime background, what do you think of cosplaying?

Pile: Speaking of cosplay, I really like Halloween themes! Last year, I cosplayed as a character before. (She was thinking really hard for the anime title, and was assisted by a fan)

I really like Menma from the series! (The character which she cosplayed)

Q: Among your songs, which one is your favourite?

Q: Why did you attend the audition for Love Live?

Pile: I was kind of persuaded to go for the audition. During that time, I was still a university student and had planned to retire for good if I did not manage to pass the audition.

The biggest turning point was being chosen for the audition, and this has opened up my world!

Q: Any message for your Singaporean fans?

Pile: Most of my fans know me through Love Live, through my character – Maki Nishikino.

However, most of them are also supporting me on my solo career! I am really grateful!

Singapore is the final Asia Tour for the year 2016. I am really very excited about coming here.

If I have another tour, I would hopefully like to come back here to perform!

Pile also mentioned about her food recipes, hobbies, relaxation tips, her favourite type/style of girls, fashion talks, Animelo Summer Live experiences, various singers she is hoping to collaborate with as well as her ideal type of girl to marry if she is a boy.

At the end of the day, four winners walked away with an exclusively designed or autographed T-shirt by Pile! There were also a total of twenty fans who had a photograph opportunity with Pile!

Currently at the halfway mark of her tour, Pile will still visit the cities of Beijing, Kuala Lumpur and Bangkok! If you stay there or plan to visit there during her tour, please do support her concert!

Pile will be also be releasing her fifth single, “Subarashiki SEKAI” – the opening theme for the TV anime “Duel Masters VSRF” – on December 28, to end of the year on a high!

One of us at J-Experience actually attended Pile’s concert at Kallang Theatre! The excerpt below is a short description of his experience:

It felt really great to be able to see Pile again, after attending her live a few months back in Japan. As usual, she looked lively & dazzling, and her performance of her melodious & lovely songs was incredibly breathtaking. In the hall, I noticed that fans from all over the world – from Taiwan to Japan, and Malaysia to even the United States – had came to support her live in Singapore!

Now on to her performance! She was impressive throughout her concert, often singing the songs one after another; as well as interacting with fans to keep them hyped. However, halfway through her performance, there were some issues with the audio, but Pile continued singing. The audio was eventually fixed and afterwards, Pile – almost with a desire and determination to bring her best performance – sang till her voice became hoarse.

Just before the start for the song “P.S.ありがとう…”, Pile expressed her gratitude to Maki (Her character from Love Live!) and summarised her heartfelt feelings. She then proceeded to teach the crowd on how & when to change the lightstick colours during her performance.

At the end of her live, she surprised the crowd not once but twice, when she came out to perform a double encore. Those that attended her live went hysterical – me included!

I had so much fun I didn’t even realised it was almost reaching the end of the concert. Pile continued to surprise us even at the end – where she wrapped up the concert with her unreleased song from her 5th single – “Subarashiki SEKAI”.

For her concerts in Japan, Pile hardly performed any of her Love Live! Songs. However, she performed it exclusively for her stops in Asia! As a fellow Love Live! Fan as well as a Pile fan, it was definitely a dream come true to have such a rare opportunity!

It was definitely an amazing concert and it’s kind of shame that the hall wasn’t sold out. However, for those that missed it due to other commitments, don’t worry, not all good things have to come to an end, yet. You can still catch Pile at Bangkok on the 14th of January next year, or at Kuala Lumpur on the 21st! We will be attending the Kuala Lumpur leg of the tour so please do join us for an exciting night!