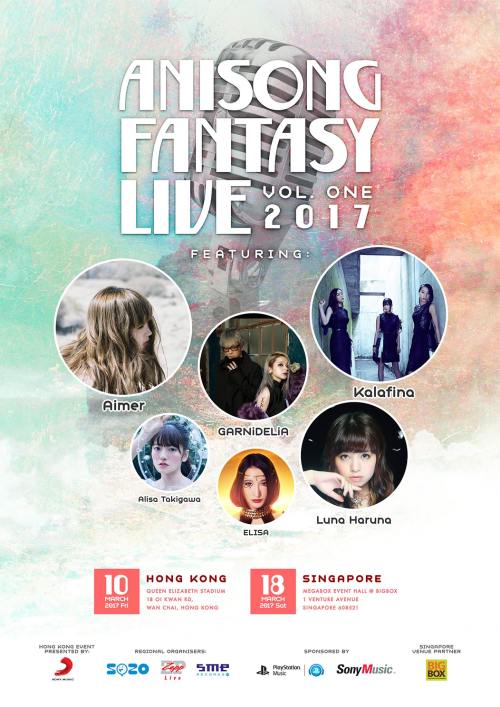 At the Anime Festival Asia Singapore 2016 event, SOZO had a big surprise installed for us – the upcoming Anisong Fantasy Live Vol. 1 2017! Organised by Sozo, Zepp Live and SME Records, the Anisong Fantasy Live brings together a star-studded line-up for two nights of musical extravaganza!

With a line-up consisting of Aimer, Alisa Takigawa, ELISA, GARNiDELiA, Kalafina and Luna Haruna, the acts all definitely fit into the fantasy theme of the concerts, having perform numerous works for fantasy-related Anime as well as having out-of-this world musical styles and vocals.

It’s definitely like a fantasy to see all six participating on the same stage, so without further ado, here are your artistes!

Aimer has had a spectacular 2016, having collaborated with well-known industry names such as RADWIMPS, taka from ONE OK ROCK and EGOiST’s chelly! She has also written numerous themes for Anime series since her major debut with “Rokutousei no Yoru” in 2011. Her most recent contributions include “ninelie” – ending theme of Koutetsujou no Kabaneri as well as “Akane Sasu” – ending theme of Natsume Yuujinchou Go.

Having also just completed her first solo live, like a daydream, in Taipei, she also mesmerised the hearts of fans who attended AFA’s I Love Anisong Concert with a poignant, acoustical performance. The rising songstress – with new goals in 2017 – will be once again gracing our shores – and Hong Kong’s – for a night of powerful and soul-stirring performances!

Composer, Songwriter, Musician, Winner of the 30th Japan Golden Disc Award Newcomer Prize. These are just some of the words that can be used to describe the emerging but, incredibly talented singer – Alisa Takigawa!

Having just debuted last year, the singer-songwriter is already making waves in the industry – with 5 singles and an album already under her belt. She has also successfully completed her first solo live tour, with a fully sold out stop at the famed Ebisu LIQUIDROOM.

With a distinctive deep yet gentle tone, she not only wants to try a wide range of genres, she wants to create a genre of her own – Alisa Takigawa’s. This is one artiste you definitely want to keep an eye on!

*Her sixth single, Northside, will be released on 22nd February 2017!

Hailing from Kanagawa, ELISA’s vocal talent can be described as nothing short of amazing – with a singing ability rooted in opera music as well as having a clear, transparent voice. Since her debut in 2007, her works – which can be described as within the genres of pop and progressive rock – have been featuring in many anime series, such as Hayate no Gotoku 2, Kakumeiki Valvrave and Mahouka Koukou no Rettousei!

Completing her first headlined tour in August, she became more active in overseas events – starting off with Sakura-Con in Seattle and then moving on to Malaysia, Macau, Hong Kong and most recently, the Philippines!

For 2017, she will be performing in Osaka and Tokyo on January 8 and 15, respectively, before coming over to our sunny island!

Once an indie group, the dynamic duo, GARNiDELiA, has evolved over the years to become the group known for their powerful songs and especially, their stunning, futuristic visuals! Consisting of the duo MARiA and toku, MARiA not only provides the vocals; she’s also the one in charge of designing the artwork and the costumes! Meanwhile, toku – who has composed music for many famous artistes – oversees the production.

Having debuted in 2014 and already with 5 singles and 3 albums, the duo is definitely not slowing down anytime soon! The group recently performed a unique two-man show with Sako Tomohisa in Hong Kong, as well as collaborated with Claris for the song “clever”.

With their songs featuring in various anime series such as Kill la Kill, Mahouka Koukou no Rettousei and Qualidea Code, be prepared to witness their exciting performance come next March!

Kalafina’s iconic trio – Hikaru, Wakana and Keiko – will grace our shores once again with their dark timbre and harmonious melodies! The group was initially created and produced by composer Yuki Kajiura and went on to provide their vocals for Kara no Kyoukai, Puella Magi Madoka Magica, and Aldnoah.Zero.

Having been in the music scene for 8 years, the vocalist group has released over 20 singles and 5 studio albums – with Kalafina with Strings, their first acoustical album, being released last month! No strangers to live performances, the trio have done countless performances and tours across Japan and are now near the finale of their Kalafina with Strings Christmas Premium Live Tour 2016.

Internationally, the group have been well-received in USA, Singapore, Malaysia, Taiwan, Hong Kong and even Germany! The trio is definitely ready to take the world by storm!

After finishing as a finalist in the 4th edition of the Anisong Grand Prix, Luna Haruna – singer and lolita fashion model, mostly for KERA – made her debut with “Sora wa Takaku Kaze wa Utau” for the second season of Fate/Zero. She then proceeded to sing for various Anime series – such as High School Fleet, Saenai Heroine no Sodatekata and most notably of all – the Sword Art Online franchise!

Her cute look and strong vocals has definitely helped to propel her onto the international stage, with performances around the world, in Asia, America and Europe. Earlier this year, she was here in Singapore for a small, intimate two-day performance at the Funan Anime Matsuri, which was warmly greeted by her fans and we can’t wait till she’s here next year!

With the Anisong Fantasy Live Vol.1 being as promising as this, it’s up in the air for who’s going to perform for volume 2! For those interested in the concert, you can purchase your tickets HERE. We, at J-Experience, are extremely excited for the line-up and cannot wait for the performance!

* Tickets will be available at URBTIX from 11 January 2017. Purchaser privileges will be announced at a separate date.

Information on the mechanics of the group photo session and collection of the poster will be made available at a later date.

Tapping on Japan’s diverse wealth of entertainment content, SOZO has positioned itself to be the ‘bridge’, connecting Japan to SE Asia – by showcasing quality concerts, engaging retail experiences and creating meaningful online engagement to audiences and businesses across South East Asia.

Zepp Live engages in concert promotion as well as events planning and production. The company is engaged as an organizer or co-organizer in shows at concert halls as well as large music festivals both in Japan and overseas.