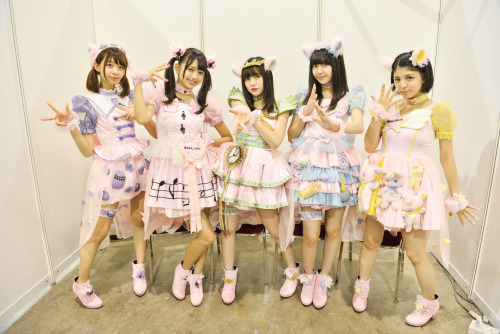 Ushering in the new age of technology comes a very unique idol group from Japan that embraces technological trends. They pride themselves as idols of a digital native generation and takes on a global approach to their activities! Who knows? They may even take over the entertainment world by storm someday!

Introducing, わーすた [WA-SUTA]! Wa-suta, comes from the abbreviation of “The World Standard”. Wa-suta allows, and even encourages fans to capture memories of their performances in the form of photos and videos, and spread them on social media! Through Social Networking Sites (SNS) and their various idol activities, Wa-suta strives to raise awareness about the KAWAII Japanese idol culture to the world!

Wa-suta is consists of five members, each with their own pastel colour!

Named as “The World Standard”, it would be no surprise to find that each member is learning a different language! Nanase and Ririka are learning English, Hazuki is learning French, , Miri is learning Chinese, and Ruka is learning Korean. Wa-suta has already had two overseas events – In Shanghai and Singapore! They will be performing at Comic Exhibition in Taiwan on 11th August! Don’t forget to drop by if you’re in Taiwan!

Officially announced last March, Wa-suta has reached impressive milestones and achievements! They were ranked first on Idol Gakkyoku Taisho’2015 in the Indie category and released their single “いぬねこ。青春真っ盛り / Dogs & Cats, In the Bloom of Youth ” in October that year!

We recently had the opportunity to meet up with Wa-suta during their visit to Singapore! Here is the full interview we had! Enjoy!

Welcome to Singapore! Please give us a group introduction.

We are Wa-suta, an idol group that is active in Japan.

We introduce Kawaii Japanese culture to the world through our activities and social media!

Please give us a self-introduction.

Hi, my name is Miri Matsuda. Please call me Miriteko.

Hi, my name is Ruka Mishina. Please call me Ru.

Hi everyone, my name is Nanase Hirokawa. Please call me Natchun.

Hi, my name is Ririka Kodama. Please call me Riri. Nice to meet you.

Hi, my name is Hazuki Sakamoto. Please call me Haa-chin. Nice to meet you.

Q: This your first time here in Singapore, how do you find Singapore so far?

Singapore is the best! We saw Singapore’s nightscape yesterday, and also ate a lot of delicious food. We’ve had two amazing live stage performances! The light and water show at the Singapore River was very beautiful. Before I realised it, tears were coming out of my eyes!

Q: Is there any food that you would like to try?

There are plenty of food that we would like to try. We have not tried Chicken Rice yet, but we really wish to try it so much.

We always wanted to try it, but our schedule could not make it, so definitely we would like to try Chicken Rice when we are here again!

Q: It seems everyone is learning a foreign language here! Why did this start?

We are known as The World Standard, as such, it would we would like to do performances around the world. Even speaking little words of another country, as such, even just one word, we would like to go to many countries to do various performances. We want to be able to connect with our overseas fans better, and show them that we are trying our best!

Q: What are the happiest memories you have since you joined Wa-suta?

It definitely has to be our first one-man live! It left me with a deep impression. 28th February, our first solo performance! At that time, many people who specially came to see Wa-suta showed up, seeing those seated fans sparkling/glittering under the lights coming to watch, enlivening the atmosphere! It was such an enchanted feeling! To me, that moment was very touching.

Within the year that Wa-suta was announced, we gathered a lot of fans. On our first anniversary, there was a live show! The fans all congratulated us on our one year anniversary, and that really surprised us. The staff also said the same thing to us. It was really an enjoyable event where a lot of fans came to support.

In actual fact, there have been many instances of fun and happy moments for me! One of the most memorable has to be during Wa-suta’s first music video. After it was completed, I watched the final video there was a satisfaction and pride knowing that I am an idol. A music video has always been my dream, to complete the music video is happiness to me.

I also experienced many instances of happiness, the one that left a deep impression on me was our first time at the huge NHK hall, a hall in japan that is humongous! It was my first time standing on stage as a member of Wa-suta! It was such a huge location with endless rows of people in front of me! It made me both very nervous and ecstatic! Standing on stage and looking at looking at all our fans, that is what happiness is!

On May 4th, on the day of major debut, Wa-suta did an event, during that time, fans congratulated us on our major debut. Last month, we were in Shanghai, and now we are in Singapore! After a very major debut, we participated in a lot of events in other countries. Being able to meet people from around the world and trying to speak to them in their own native language is a very nice feeling! I hope we more chances to show the world that each of us are trying hard to learn a different language!

Q: What is it like to spend time with the other members?

Well, Wa-suta members get along very well! The five of us watch a movies together, go out shopping together, and talk about school all the time! We also have sleepover parties! Even on rest days, we also spend time together. It seems we are almost together every day!

Q: What are your goals/dreams for the future of the Wa-suta?

Staying true to the name “The World Standard”, we are striving hard to be a world standard group. Eventually, we would like to go on our very own Wa-suta solo world tour.

You can catch the other interview questions here.

An aspiring idol group that wants to reach out to fans beyond their shores. You just cant resist not to support them! Hopefully, you would not have forgotten their performances at Chara Expo 2016.