[AFASG’15] [INTERVIEW] SUZUKO MIMORI: “I MIGHT HAVE BEEN AN ENGLISH TEACHER!”

[AFASG’15] [INTERVIEW] SUZUKO MIMORI: “I MIGHT HAVE BEEN AN ENGLISH TEACHER!” 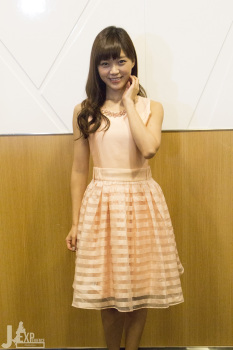 Mimorin debuted as a solo artist in April 2013. Earlier this year, She had already released her 2nd album, “Fantasic Funfair”, and 5th single, “Light for Knight”.

“Fantasic Funfair” was ranked at 5th and “Light for Knight” coming in at 6th position on the ORICON charts.

Having been to Singapore numerous times before, this Anime Festival Asia (AFA) marked a special occasion for her! Mimori was invited down as an artise, rather than a representing member from the ever popular Love Live! series! It was also her maiden performance here in Singapore!

Check out our interview below, where she shares her thoughts on Muse and even pursuing a solo career! You’ll be in for a mighty shocking surprise about her alternative/backup occupation too!

It has already been 6 years since I have been doing the role and because of that, I feel that, slowly, Umi-chan and I are becoming like one person – one entity.

Q: You not only voice Umi as a voice actress, but are also taking part for the Cardfight Vanguard stage play. How do you feel about not just providing voice for the character (in the anime)?

I feel that it doesn’t really matter much, as both have something to do with acting. However, as a voice actress, I actually put in more life into the character itself.

Q: Who do you ship Umi with in Love Live?

For the whole group, there are 9 people. It’s an odd number. Someone would definitely be left out. But I feel that Umi is quite a character that can enjoy the solitude, she enjoys being alone. If she really has to choose somebody, she would choose Honoka. Because she feels that when she is with Honoka, she can revert back to like when she was in a young time as a small child. They both grew up together into high schoolers. From then on, I find that Umi would choose Honoka.

Q: Please tell us more about your 5th single, “Light for Knight”. What would you do if you become a knight for one day?

Since I am actually a girl, I really don’t want to become a knight! But instead, I hope that one day, my knight can appear. If I actually would become a knight, I feel that most likely I would want to help out with the cute girls.

Up till now, my songs have been feminine, the cute kind of songs. So for my 5th single, this song is quite a different genre, it’s cool and assuasive song. I want my fans to actually look up the gap, the difference in the song.

Q: What would you like to do for your next one man live?

This time round, for the Fun Fun Fantasic Funfair, I feel that it’s not really a live, but it’s more like a show performance – there’s singing, dancing and I even acted as a voice actress. So I hope that for the next time round, I could try something similar. And I hope you guys can also look out for that.

Q: How do you feel about performing in group and performing solo? Is there any significant difference in your opinion?

For the group performances, there are many members. Everyone can help, support each other and everyone thinks together. I can actually think that “I will try my best not to let everyone down”. I am also not good in the talking segment of the performances, so with the other members around, they will help me, and I am really thankful for that part. Thus, I am grateful for the support of my fellow members when performing in a group.

For solo, I tell myself that “I must pull through this whole thing, I’ve to be strong as there’s no one for me to rely on”, and I can rely only on myself. However, I feel that it’s really very fun, as I can get all the attention while everyone is looking at me. That part is the difference I find between being in a group and going solo.

Q: If you are not a voice actress or a singer, what other career would you pursue?

Q: Would you mind sharing some information about your upcoming Christmas song?

It’s the first Christmas song that I got to sing, so I’m really excited about the single as well. I feel that if the fans could actually link it with Christmas and whenever it’s Christmas, it’s going to be Mimori Suzuko’s “Happi Happi Christmas”. So in this way, I feel that if the song can be a representative of Christmas in her fans’ hearts, it would be something really great. I will also place those feelings into making the single. I feel that the song would really fit the whole Christmas atmosphere, and I hope that my fans, not only in Japan but also in Singapore, can give me the support for this single.

Q: Do you have any Christmas wishes for your fans and to yourself?

On 30th of December, there’s actually this very big show called “Kouhaku Uta Gassen”, a New Year show in Japan. For the first time, Muse would get to perform on that show. I hope that it would be a successful performance. I also hope that my solo career would flourish as well from now on and not really as a part of Muse. I would like to wish for all of these to set the course.

Q: Who is your favourite artist that you look up to and who do you want to collaborate with in the future?

The artist that I actually looked up to was the lead singer, Yuki, from the famous band called Judy and Mary. They sang the ‘Sobakasu’ for Rurouni Kenshin. I feel that Yuki is really very cute. For me, she’s irreplaceable, she’s “God” and I really, really look up to her very much. So I feel that if I could become someone like Yuki-san, it would be really great.

For the collaboration, since to me, Yuki is someone that is out of reach, I actually want to try something which is out of the norm. Not your usual collaboration up till now, something like orchestra. If I could do collaborations with a famous orchestra out there, or maybe an opera, it would be something delightful.

With that, we have come to the end of the interview! We hope that we have brought you closer to Mimorin and let you understand more about her!

I don’t know about you, but I’m really excited about her new single – Happi Happi Christmas! It’s going to be released on the 9th of December this year! You can only purchase it from canime.jp, at ¥1,111. It’s time to break free from the usual Christmas loops~